KGO
NORRISTOWN, Pa. -- Bill Cosby lashed out at the prosecutor in an expletive-filled tirade in the Norristown, Pennsylvania courtroom where he was convicted Thursday on all charges in his sexual assault retrial.

Montgomery County District Attorney Kevin Steele had asked for Cosby's bail to be revoked, telling the judge he had concern Cosby could flee, saying "he has a plane!"

Cosby shouted, "He doesn't have a plane, you a--hole!"

Cosby stood up and erupted after jurors left the courtroom. The judge ruled that Cosby will remain free pending sentencing.


Cosby, 80, could end up spending his final years in prison after a jury concluded he sexually violated Temple University employee Andrea Constand at his suburban Philadelphia home in 2004. He claimed the encounter was consensual.

The verdict came after a two-week retrial in which prosecutors put five other women on the stand who testified that Cosby, married for 54 years, drugged and violated them, too. One of those women asked him through her tears, "You remember, don't you, Mr. Cosby?"

The panel of seven men and five women reached a verdict after deliberating 14 hours over two days, vindicating prosecutors' decision to retry Cosby after his first trial ended with a hung jury less than a year ago. 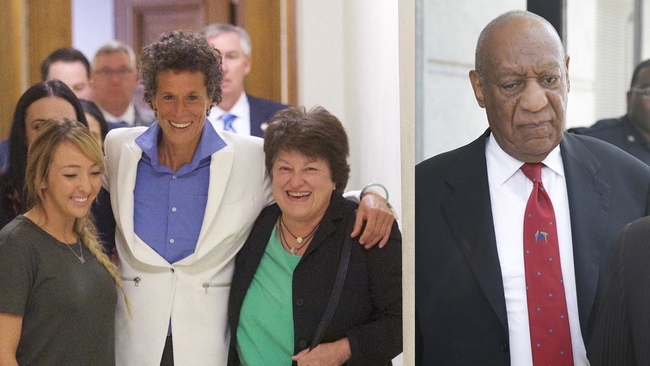