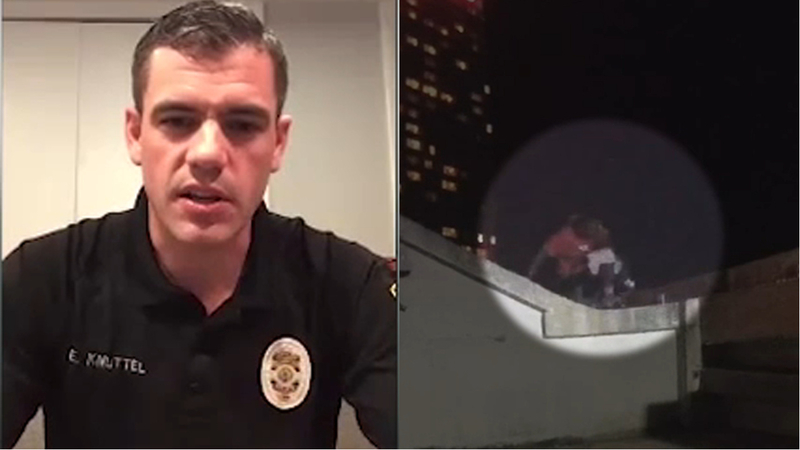 Officer risks his life to save suicidal man in Atlantic City

ATLANTIC CITY, N.J. -- It was Wednesday night when Atlantic City Police Officer Eric Knuttel saved a suicidal man from jumping off the roof of the 13-story Claridge Hotel parking garage.

Two days later, the officer spoke to Action News about how the moment unfolded.

"I saw that man and I knew he needed help. You could just hear the pain in his voice and the way he was talking. I tried to build a rapport so he knew there are people that care," Knuttel said.

A man who appeared to be ready to take his own life was pulled to safety thanks to the quick work of several Atlantic City police officers.

Police responded to the garage after they received calls of a suicidal man around 8:43 p.m. Wednesday.

Knuttel, a member of the Crisis Negotiation Team, stepped up on a tiny platform, with no barrier blocking the edge, to save the man. The officer told Action News he spent approximately 10 minutes on the ledge prior to what is seen in the video talking with the man.

While he was up there he knew not only was the man's life in danger, so was his, but in that moment it didn't matter.

When the man stood up to jump off the building, Officer Knuttel dove and grabbed the man's legs.

"I knew when I had the lower half of his body and I had his one leg, I knew I wasn't going to let him go," Knuttel said.

Responding officers were standing by and pulled them both to safety.

In the bodycam video, Knuttel can be heard telling the man, "I love you, alright? We're here to help you."

Knuttel said we've all been through rough patches in life and his job as a police officer is to get people through them.

"Through the conversation that we were having, that man has so much potential. He was faced in crisis at that moment and I knew I needed to help him," Knuttel said.

Knuttel said if he was faced with a similar situation again, he'd do it all same. He said he's a police officer and he's here to help no matter what.