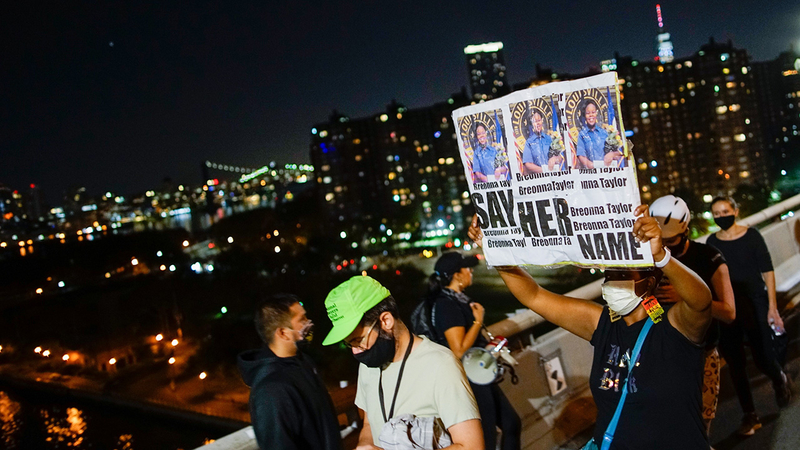 LOUISVILLE, Ky. -- Authorities pleaded for calm while activists vowed to fight on Thursday in Kentucky's largest city, where a gunman wounded two police officers during anguished protests following the decision not to charge officers for killing Breonna Taylor.

Outrage over a grand jury's failure to bring homicide charges against the officers who burst into the Black woman's apartment six months ago set off a new round of demonstrations Wednesday in several American cities. The state attorney general said the investigation showed officers were acting in self-defense when they responded to gunfire from Taylor's boyfriend.

Though protests in Louisville began peacefully, officers declared an unlawful assembly after they said fires were set in garbage cans, several vehicles were damaged and stores were broken into. A 26-year-old man was arrested and charged with firing multiple gunshots at police and wounding two officers.

"Violence will only be a source of pain, not a cure for pain," said Mayor Greg Fischer. "Many see Breonna Taylor's case as both the tragic death of a young woman and the continuation of a long pattern of devaluation and violence that Black women and men face in our country, as they have historically."

"The question obviously is: What do we do with this pain?" the mayor asked. "There is no one answer, no easy answer to that question."

A Kentucky grand jury on Wednesday indicted a single former police officer for shooting into neighboring apartments but did not move forward with charges against any officers for their role in Breonna Taylor's death.

Activists, celebrities and everyday Americans have been calling for charges against police since Taylor, an emergency medical worker, was shot multiple times by white officers after one of them was fired upon and wounded while conducting a raid in a narcotics investigation in March.

The officers had a no-knock warrant, but the investigation showed they announced themselves before entering, said state Attorney General Daniel Cameron. The warrant was connected to a suspect who did not live there, and no drugs were found inside.

Along with George Floyd, a Black man killed by police in Minneapolis, Taylor's name became a rallying cry during nationwide protests this summer that called attention to entrenched racism and demanded police reform.

Activists said they would press on with their calls for justice after a single officer was charged Wednesday with wanton endangerment for shooting into apartments neighboring Taylor's.

"In our distress, we reaffirm our dedication to the eradication of systemic racism in our city," the group Louisville Showing Up for Racial Justice said in a statement. "We will keep showing up, speaking up, and joining the movement for systemic change led by Black people."

A grand jury has indicted a fired Kentucky police officer on criminal charges in the Breonna Taylor case - but not for her death. ABC News' Dan Abrams explains those charges.

In Louisville, Interim Police Chief Robert Schroeder said the two officers shot during protests were "doing well and will survive their injuries."

Maj. Aubrey Gregory, a Louisville officer for more than 20 years, was shot in the hip and was treated and released from the hospital. Officer Robinson Desroches, who joined the force 18 months ago, was shot in the abdomen and underwent surgery. Schroeder said he was in stable condition.

Larynzo D. Johnson, 26, was charged in the shootings with two counts of assault on a police officer and multiple charges of wanton endangerment of police officers. An arrest citation said police had video of Johnson shooting at officers as they tried to disperse a crowd. It was not clear if he had a lawyer.

In Washington, Senate Majority Leader Mitch McConnell condemned the violence in his home state and called the officers' shootings acts of "despicable cowardice that must be met with the full force of the law."

Taylor's case has exposed the wide gulf between public opinion on justice for those who kill Black Americans and the laws under which those officers are charged, which regularly favor police and do not often result in steep criminal accusations.

A grand jury returned three charges of wanton endangerment against fired officer Brett Hankison. No charges were brought against the other officers involved.

Each of the charges Hankison faces carries a sentence of up to five years. David Leightty, Hankison's attorney, did not return calls requesting comment Wednesday and Thursday. But when Hankison was fired in June, Leightty wrote an appeal to the Louisville Police Merit Board, calling the officer's firing a "cowardly political act."

Carmen Jones has protested in downtown Louisville every day for nearly three months. She said she feels despair after the grand jury's decision and doesn't know what's coming.

"We're tired of being hashtags. We're tired of paying for history in our blood and our bodies and being told to respond to this violence and aggression with peace," she said. "We did it the Martin way for the entire summer, and it got us nowhere. Maybe it's time to do things the Malcolm way."

The FBI is still investigating potential violations of federal law in connection with the raid at Taylor's home.

Ben Crump, a lawyer for Taylor's family, denounced the grand jury decision as "outrageous and offensive."

President Donald Trump read a statement from Cameron, saying "justice is not often easy." He later tweeted that he was "praying for the two police officers that were shot."