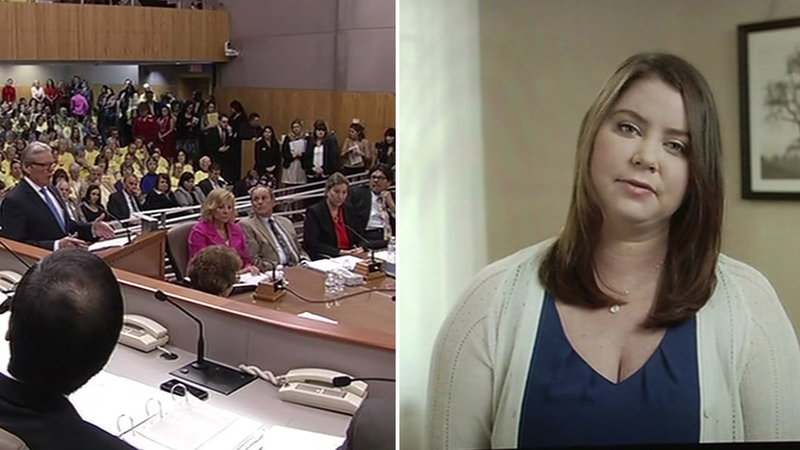 SACRAMENTO (KGO) -- It was an emotional day of testimony on Wednesday in Sacramento, where a bill was introduced that would allow terminally ill Californians the choice to end their own lives with a prescription medication.

Leading the proponents was the family of Brittany Maynard, the Bay Area woman who had to move to Oregon to carry out her wish. They unveiled a new video aimed directly at lawmakers in Sacramento.

While Maynard is seen calmly stating her case, this is certainly an issue that stirs deep emotions.

"I am heartbroken that I had to leave behind my home, my community and my friends in California," Maynard said in the video.

They are the words of a terminally ill young woman meant to make a lasting impression long after her death.

"I am dying and I refuse to lose my dignity. I refuse to subject myself and my family to purposeless, prolonged pain and suffering at the hands of an incurable disease," Maynard said in her video testimony.

Her video testimony was made 18 days before she chose to end her life with medication prescribed for that purpose in Oregon.

"She took a stand and she said, 'Oh, Momma. I hope that other people will speak up when I'm gone," her mother, Debbie Ziegler, said.

Brittany Maynard's mother tells CA Sen Comm "Dying is not negotiable. How we die is." Testifying in support of SB168. pic.twitter.com/TpUcdd4IQg

Maynard's mother and husband appeared in Sacramento in support of Senate Bill 128, called the End of Life Options Act.

Opponents testified that the bill would basically sanction suicide.

"Personally I have an issue with a person deciding when they are going to end their lives and I think we, as a society, should," Right to Life Central California spokesperson Rebecca Peerson said.

"Brittany intentionally put this video together to be played to legislators, the people who have the ability to influence change," Maynard's husband, Dan Diaz, said.

If it clears the Senate Health Committee, SB 128 would move on to the full Senate.

#BrittanyMaynard in video testimony to CA Leg. "Knowing I can leave with dignity...allows me to focus on living." pic.twitter.com/lOYbWpp4nM