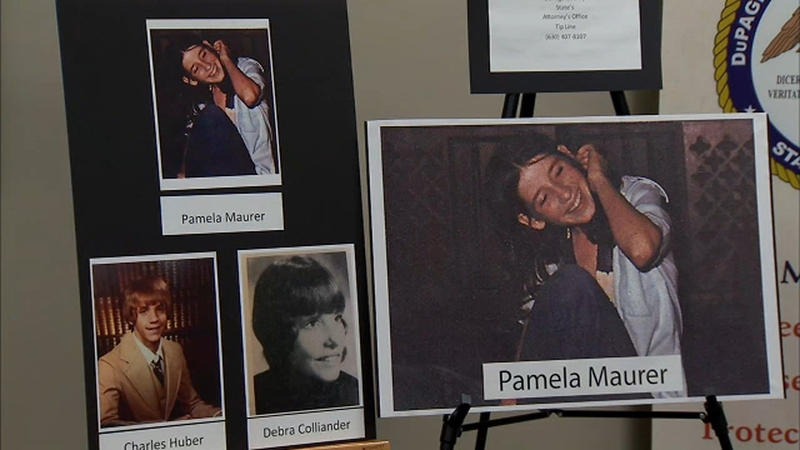 WHEATON, Ill. -- Authorities in Illinois announced Monday that the 1976 murder of high school student Pamela Maurer has been solved.

The 16-year-old from Woodridge, Ill. left a friend's house on the night of January 12, 1976 to get a soft drink. Her body was found the next day by a road crew on the side of College Road in Lisle, Ill. . An autopsy found that Maurer had been strangled and authorities said she had been sexually assaulted.

Pam's murder remained a mystery for decades. The 16-year-old's murder was thoroughly investigated, including collecting and preserving DNA evidence from Pam's body before the technology was even available. In 2001, a DNA profile of her suspected killer was found, but no hits were generated.

Then in 2019, advanced DNA technology helped authorities create a composite of the killer.

"This resulted in the creation of a snap shot prediction for traits such as the suspects eye color, hair colors face shape which provides an approximation of the unknown subject," said DuPage County State's Attorney Bob Berlin.

On Monday, the DuPage County State's Attorney's Office announced that Bruce Lindahl of Aurora, Ill., was responsible for the crime. Lindahl was 23 at the time of the murder and died in 1981 from self-inflicted injuries he sustained in the stabbing murder of 18-year-old Charles Huber of Naperville, Ill.

"We finally have a face and name to this monster, that's what he was a monster," said Detective Chris Loudon with the Lisle Police Department.

Lindahl's body was exhumed to compare his DNA with the DNA sample collected from the crime scene and authorities said tests confirmed there was a match.

"It does relieve me and all our friends involved that it was an actual stranger, and she fought," said one of Maurer's high school friends, Cindy Evans.

Berlin said Colliander escaped and charges were filed against Lindahl, who was released on bail. Berlin said Lindahl told a friend that he was charged with rape and that if the girl who pressed charges against him did not appear in court, he would get out of it. On October 7 1980, two weeks before trial proceedings were to start, Colliander disappeared after leaving her job and the case against Lindahl was ultimately dismissed, Berlin said.

On April 28, 1982, Colliander's body was found in a shallow grave in rural Oswego Township, Ill.. Her death was ruled a homicide.

Berlin said authorities are seeking information on the disappearance of Debra McCall, who disappeared from Downers Grove in November of 1979. Photographs of the Downers Grove North High School student were found in Lindahl's home after his death, as well as photographs of other women, Berlin said.