Officials say the initial firefight to control the North Fire that swept across 15 Freeway in Southern California was hampered by five drones that were being flown in the area.

CAJON PASS (KGO) -- Officials say the initial firefight to contain the North Fire in Southern California was hampered by five drones that were being flown in the area when flames broke out.

Several firefighting aircraft were delayed or diverted until the drones moved out of the area. Officials say firefighting planes were grounded for at least 26 minutes when they should have been putting out the fast-moving wild fire that swept across 15 Freeway.

Ground crews tracked down the drone operators and forced them down.

Fire Prevention Specialist Pam Temmermand says there's no way to know exactly how many structures or vehicles were lost because of the delay. She says grounding operations when a drone is overhead is not negotiable. "It could be like a bird strike that you would have. A drone could hit an aircraft it could get sucked into an engine, you could have a mid-air disaster," Temmermand said. "Because this has become a new threat and people don't know about it, the way we educate the public is doing what we're doing right now speaking to you."

Southern California US Congressman Paul Cook recently introduced legislation banning drones over wild fires. The bill makes it a federal offense to launch a drone that interferes with firefighting on federal land.

In the Meantime, defense and technology firms are in a race to develop counter drone technology, which would likely electronically capture guidance signals to bring drones down safely.

The fire had burned over Interstate 15 on Friday in Cajon Pass, a mountainous area 55 miles northeast of Los Angeles. It destroyed 20 vehicles on the freeway linking Southern California and Las Vegas before burning three homes and 44 more vehicles in the nearby community of Baldy Mesa.

"Things look so much better," Bob Poole, a U.S. Forest Service spokesman, said as he looked across the charred landscape dotted with a half-dozen small plumes of smoke.

Poole said winds that were gusting to 30 mph caused some flare-ups within the perimeter of the fire, "but nothing that's giving us too much concern."

As fire crews focused on protecting homes in Baldy Mesa, Interstate 15 reopened Saturday and activity began returning to normal in the area scarred with blackened terrain.

"It's pretty much burnt desert," said Keishawna Williams, who watched in horror Friday as the fire crossed the freeway outside the fast-food restaurant where she works.

As scared as Williams was, she said she couldn't imagine being on the highway when the blaze broke out. She was amazed that no one was killed.

Sheer chaos erupted when the fire ignited next to Interstate 15 on Friday. Fueled by 40 mph winds, the blaze raced uphill and onto the traffic-clogged freeway, temporarily trapping hundreds of people amid a cauldron of smoke, flames and ash.

"We were surrounded by the flames. They were to the left, then in front of us and they came around to the right. We were in a big horseshoe in the middle," Russell Allevato said.

The Michigan man, who was on vacation with his family, watched helplessly as flames engulfed his rental car and destroyed everything inside while he, his nephew and two teenage daughters fled to safety.

"People were screaming. It was just crazy," he said.

Drivers and their passengers had no choice but to abandon their cars as the flames hopscotched down the freeway, destroying 20 vehicles, several of which exploded in fireballs.

Among those trapped by the flames was Lance Andrade, a 29-year-old railroad conductor from nearby Apple Valley who found himself caught in the traffic jam just as the fire jumped the freeway. Soon, people were running toward him and he joined them, only to find there was nowhere to run. Flames had surrounded him and the others.

A panicked-looking firefighter ordered everyone to take cover, and Andrade said he huddled with four other men and two elderly women in the back of a tractor-trailer rig until the flames passed. One of the women, who had become separated from her family, began to cry. Everybody was terrified.

"You could hear the explosions from people's vehicle tires popping from the heat," Andrade said. "You could hear crackling. Smoke was coming in every direction. You could feel the heat. We just waited it out and prayed to God."

Nelly Venzor said she and several members of her family, including her 95-year-old mother, abandoned their car and received a ride to their home in nearby Hesperia from a stranger in a pickup truck.

"When the fire just jumped to the other side of the freeway I thought, 'It's really hot and my mom is in the car. And if we have to run it has to be done now. Quick, before we get stuck here and roast,'" Venzor said.

California is in the midst of severe drought, and wildfires are common. Some break out near freeways, but it's very unusual to have vehicles caught in the flames.

It being a Friday afternoon, however, Interstate 15 was typically jammed with vehicles traveling between Los Angeles and Las Vegas. Adding to the congestion was construction work in the area.

Allevato and his family had left Las Vegas earlier in the day for Los Angeles, where they had hoped they might meet the Kardashian sisters at the family's West Hollywood clothing boutique.

"We waited two years for this vacation, and I saved all my money," she said. "I was thinking about it every day, and I finally got here and I have no clothes ... I waited so long, and it's ruined."

Meanwhile, a blaze that started Friday in the San Gabriel Mountains, about 20 miles northwest of the other fire, forced about 300 campers to flee near the community of Wrightwood.

Pouring rain Saturday helped crews fighting the fire, though several lightning strikes forced them to stop working for a time. 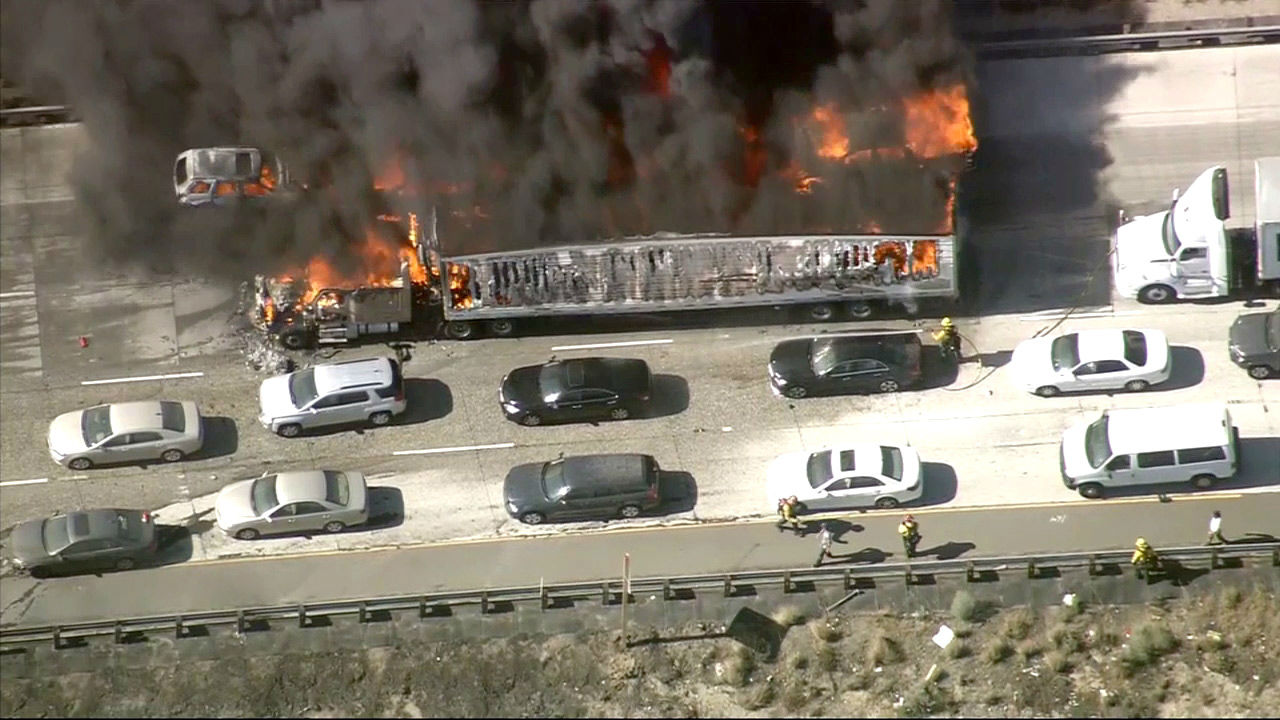