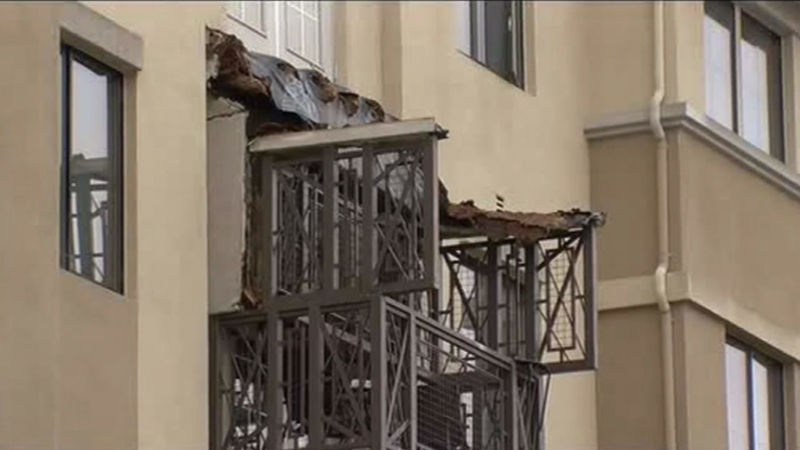 The lawsuits make disturbing allegations that the balcony was poorly constructed, sustained dry rot to the point of growing mushrooms and officials at the apartment complex knew about the dangers, but failed to fix them.

Just hours after the balcony collapsed at Berkeley's Library Gardens complex, killing six college students from Ireland and badly injuring seven more, experts told the I-Team water damage was clearly the cause. The support beams could be seen flaking away in a worker's hand, because of dry rot.

"That indicates the extent of that rot, which is pretty severe," Don Danmeier, a forensic architect said.

That's the focus of the lawsuits filed against 39 defendants, including: Segue Construction, which built the complex and its sub-contractors; Blackrock Investment, the current owner of the property; and Greystar, the property management firm for Library Gardens.

The lawsuits allege the builders cut corners to save money, that a subcontractor did not use plywood called for in the plans, but cheaper oriented strand board that is more susceptible to water damage and dry rot. The lawsuits say the builder framed the balcony in Oct. 2005, but did not waterproof it right away.

The next two months, the bare wood was exposed to more than 13 inches of rainfall. It was a wet winter.

The lawsuits say, that January, "These defendants consciously chose to waterproof and complete construction of the balcony for apartment 405, without correcting the water saturated wood components."

And that the waterproofing locked in the moisture, creating "a concealed and hidden trap."

Between Oct. 2008 and summer of 2010, the lawsuits allege, "Tenants observed large mushrooms growing from multiple locations on the surface of the apartment's balcony, an unambiguous red flag warning that the wooden joists were rotting and that the balcony was at great risk for collapse."

The lawsuits say at least one tenant's complaint about the mushrooms is contained in a written document.

Dan Noyes: How important is that document?
ABC7 News legal analyst Gill Soffer: It's very important. If the plaintiffs can demonstrate that there were red flags, that they failed to pay attention to that they ignored, complaints just like the ones we were talking about, that puts those defendants at serious risk.

The lawsuits do not contain a dollar amount for damages, but Soffer says, it could be huge.

"You're talking about millions upon millions of dollars certainly because they're young people who at least from the face of the complaint appear to have serious and perhaps lifelong injuries. That's the sort of case that generates a very big damages figure," Soffer said.

Through their attorneys, the surviving victims and the families of those who died declined to be interviewed for this report. The law firm issued a statement that reads in part, "Our clients... hope that this litigation will bring to light the negligence and carelessness that caused this entirely avoidable tragedy that has produced so much pain and loss, both here and in Ireland."

Ashley Donohoe is the only Bay Area victim. She died, as did her cousin and four other students from Ireland.

The Donohoe family attorney sent the I-Team a statement Thursday evening, saying they want "to make sure that those who were responsible for this tragedy will be held accountable. While the civil litigation is proceeding, our office will do everything it can to assist the DA in its criminal investigation."

There was no comment from the major companies. One engineering firm said they expect to be dismissed from the case, because their work played no role in what happened.