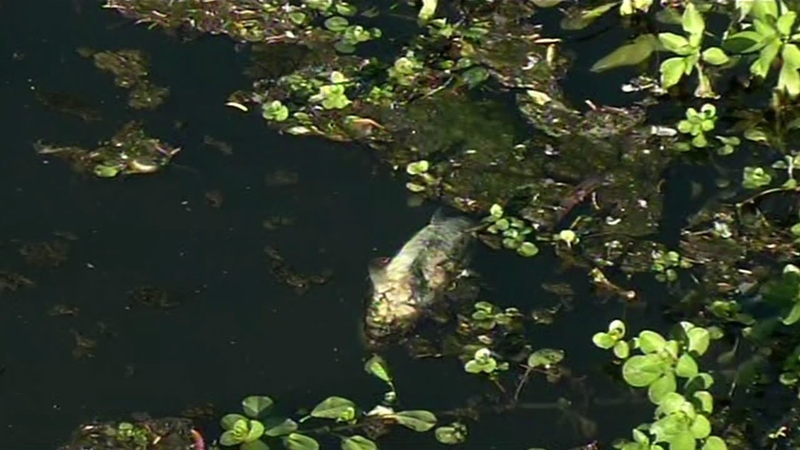 LOS GATOS, Calif. (KGO) -- Lots of dead fish are turning up in a lake in the South Bay. It is unpleasant and worrisome. You can't miss the smell if you're around Vasona Lake in Los Gatos, but that's not the only problem. All of those dead fish are attracting some unwelcome visitors as well.

It's the circle of life and as one water expert put it, nature can be cruel sometimes. Fish are dying and animals are in survival mode.

Among the beauty and the wild life at Vasona Lake lies an ugly and smelly problem. Dead, decaying fish are floating in the muck and the very algae that helped kill them.

"When you have high nutrients, high water temperatures, you tend to get issues with water quality and algae," Debra Caldon from the Santa Clara Valley Water District said.

The algae sucks the oxygen out of the water. Now the dead fish are attracting vultures. Once they've picked through the carcasses, there's just a bad smell and dead fish left over.

Also not the norm in the park is daytime coyote sightings. A dog owner spotted a coyote in the park last week at 10:30 a.m. Coyotes are typically nocturnal. Wildlife experts think they are coming to the lake for water since other sources may have dried up.

Coyote Watch Los Gatos member Jo Beth Dow was traumatized by a coyote encounter a few years ago. Now she won't walk her dog without her repellant spray handy. She said, "Absolutely, I'm scared. Because in 2009 my cat was taken off my front door step and killed by a pack of coyotes."