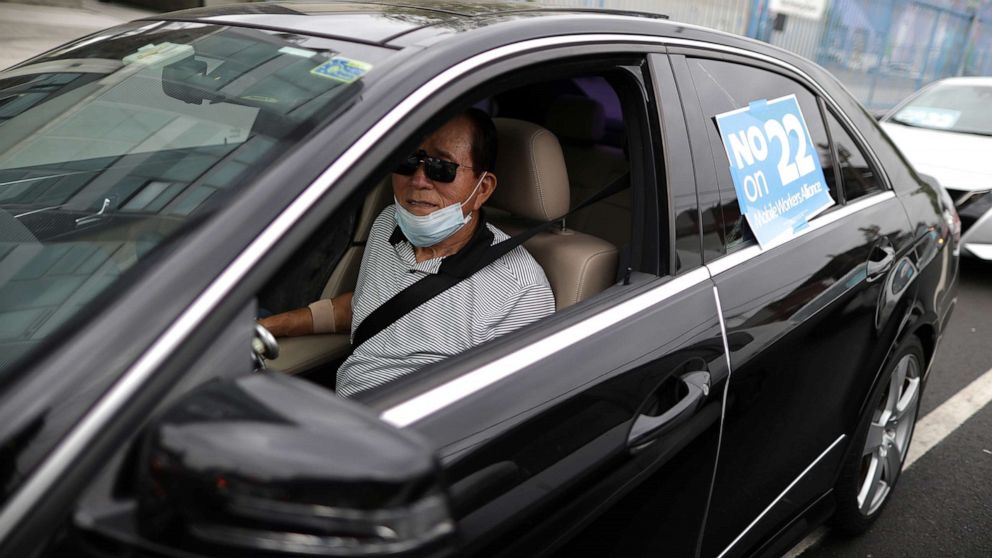 A California judge on Monday said Uber and Lyft cannot classify their drivers as independent contractors instead of employees, delivering a major blow to the rideshare giants that have fought to block their drivers from receiving employee protections such as sick leave and overtime pay.

The preliminary injunction compelling the new classification is on hold for 10 days until the companies have a chance to appeal. Uber and Lyft have already vowed to fight the ruling, arguing that drivers want the flexibility that comes with contractor status.

Uber and Lyft have argued that their businesses are platforms that connect customers to drivers, rather than transportation companies. San Francisco Superior Court Judge Ethan P. Schulman dismissed that reasoning, writing that it "flies in the face of economic reality and common sense."

"Uber's argument is a classic example of circular reasoning: because it regards itself as a technology company and considers only tech workers to be its 'employees,' anybody else is outside the ordinary course of its business, and therefore is not an employee," Schulman noted. "Were this reasoning to be accepted, the rapidly expanding majority of industries that rely heavily on technology could with impunity deprive legions of workers of the basic protections afforded to employees by state labor and employment laws."

"To state the obvious, drivers are central, not tangential, to Uber and Lyft's entire ride-hailing businesses," Schulman added.

Uber and Lyft claim drivers want the flexibility to create their own hours. Uber has also argued that the need for flexible work is especially critical during the COVID-19 pandemic and the ensuing unemployment crisis.

"Drivers do not want to be employees, full stop," Lyft told ABC News in a statement. "We'll immediately appeal this ruling and continue to fight for their independence. Ultimately, we believe this issue will be decided by California voters and that they will side with drivers."

Uber did not immediately respond to ABC News' multiple requests for comment Tuesday. A spokesperson for the company told The Associated Press that "our elected leaders should be focused on creating work, not trying to shut down an entire industry during an economic depression."

Meanwhile, in November, a proposition backed by Uber and Lyft is on the ballot in California that would allow app-based drivers to be classified as independent contractors instead of employees.

Monday's decision comes after California -- led by its Attorney General Xavier Becerra and city attorneys from Los Angeles, San Diego and San Francisco -- sued Uber and Lyft over their classification of drivers in May.

"The court has weighed in and agreed: Uber and Lyft need to put a stop to unlawful misclassification of their drivers while our litigation continues," Becerra said in a statement Monday in response to the preliminary injunction. "While this fight still has a long way to go, we're pushing ahead to make sure the people of California get the workplace protections they deserve."

Advocacy groups lauded the judge's ruling as a "victory for workers."

"This is a huge victory for workers and confirms what we already knew: Uber and Lyft have been breaking the law by misclassifying drivers in order to deny them fair wages and healthcare," Transport Workers Union President John Samuelsen said in a statement.

He continued, "Drivers everywhere are standing up to fight for their rights and the courts have taken their side in case after case. Now it's time for the companies to do what's right: pay drivers what they are owed, provide the protective equipment they need, and treat them with the dignity they deserve."

Nicole Moore, a driver and organizer with the group Rideshare Drivers United, responded to the news in a statement, calling it a "significant win for drivers and for all workers."