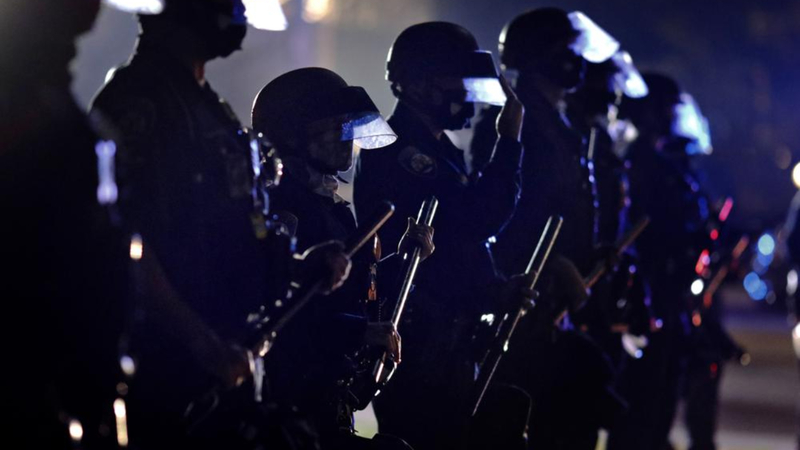 Gov. Gavin Newsom signed into law several criminal justice reforms Thursday, including a bill that would require police officers across California to intervene if they witness excessive force by a fellow officer.

AB 26 addresses, in part, the three other Minneapolis police officers present at George Floyd's murder, who have not yet stood trial. As part of the new set of guidelines, officers will be required to report the incident of excessive force in real time. They cannot be punished for speaking up.

"Finally, AB 26 required an officer who failed to intervene be disciplined, up (to) and including, in the same manner as an officer who used excessive force," Assemblymember Chris Holden said.

Failure to intervene could also lead to an officer's certification getting suspended or revoked, made possible by another bill that was signed Thursday.

Newsom signed the legislation during a sometimes emotional event in a Los Angeles County park where Kenneth Ross Jr., a 25-year-old Black man, was killed in 2018.

Police responded to a shots fired call in Gardena to find Ross running through the park. They said he failed to listen to commands.

A review found the officer who shot him acted lawfully because he thought Ross was an active shooter. He was cleared of wrongdoing, but had previously been involved in three other shootings.

"He transferred from Orange County after being involved in three questionable shootings there," said California State Senator Steve Bradford.

Nearly two years after Kenneth Ross was killed in a police shooting, family members and activists are demanding action against the Gardena officer who fired his weapon.

The Kenneth Ross Jr. bill allows the state's post commission to investigate and decertify police officers who engage in serious misconduct, preventing them from transferring to another department.

Officers can now lose their certification for serious misconduct including using excessive force, committing sexual assault, intimidating witnesses, making a false arrest or report, or participating in a law enforcement gang. Other grounds include "demonstrating bias" based on race, religion, gender identity, sexual orientation or mental disability, among other criteria.

"What this does is really kind of pull the cover off this notion of bad apples policing, and say not only will we not have bad apples, we don't want a bad orchard or a bad tree either," said Melina Abdullah, Black Lives Matter co-founder.

Abdullah has pushed for some of the signed legislation for two years following Ross's death. She called Thursday's signings important, but stopped short of calling it a win.

"A real win, a real victory would be that Kenneth Ross Jr. was still with us, that many of the people who were killed by police in the state of California were still with us," she added.

"Say his name," supporters chanted softly as Newsom signed the bills and Ross' mother, Fouzia Almarou, spoke of her ever-present pain and agony as well as her hope that the new laws will prevent other Black and Brown deaths.

The mother of Angelo Quinto, Sandra Quinto Collins, burst into tears and was hugged by Newsom before other family members told how he died after a San Francisco Bay Area officer pressed a knee to his neck during a mental health crisis just before Christmas last year. A new law will restrict such face-down holds that can cause what's known as positional asphyxia.

Newsom also signed a measure setting statewide standards for when officers can use "kinetic projectiles" like rubber bullets and chemical agents or tear gas to break up peaceful demonstrations. Police also are prohibited from aiming rubber bullets, beanbags and foam rounds at anyone's head, neck or other vital areas.

During the 2020 racial justice protests some demonstrators acting peacefully were injured by rubber bullets and other projectiles.

The new law also requires training officers to use the less-lethal weapons only when someone is at risk of death or serious injury, or "to bring an objectively dangerous and unlawful situation safely and effectively under control." Officers will have to give verbal warnings and try other de-escalation tactics first.

Police groups opposed the measure, arguing the less-than-lethal tools are needed to prevent violence and are often better than the alternatives.

The law allowing the decertification of poor officers comes 18 years after lawmakers stripped away that power from a state police standards commission.

That left it to local agencies to decide if officers should be fired, but critics said they could often simply get a job in a different department.

The legislation will create a mandatory new state license, or certification, that can be permanently revoked. Allowing decertification will end "the wash, rinse, repeat cycle of police misconduct," Bradford said.

The decertification measure still struggled to gain support in the Assembly this year until Bradford agreed to allow suspending the license as a lesser punishment and beefed up other safeguards.

Unions representing officers in Los Angeles, San Francisco and San Jose declared victory with those changes to a bill they said would originally have allowed ending officers' careers "for infractions as minor as a jaywalking ticket."

Law enforcement organizations and Republican lawmakers objected that the bill is still biased because just two of the nine members of a new disciplinary board will represent police, while the remaining seven will have professional or personal backgrounds related to police accountability.

Supporters including Bradford said that isn't stacked against officers because the 18-member Commission on Peace Officer Standards and Training is mostly composed of law enforcement professionals and will make the final decision.

Both California Police Chiefs Association president Abdul Pridgen and Brian Marvel, president of the rank-and-file Peace Officers Research Association of California, said they hope to continue working out what they say are lingering flaws and vagueness in the bill, while supporting the overall goal.

"We cannot allow officers who demonstrate gross misconduct to continue to be members of the law enforcement profession; their licenses must be revoked," Marvel said.