"The scene in the rotunda, it was complete mayhem," Win McNamee said. "People were entering from multiple directions. People were climbing on these historic statues, posing for selfies, chanting."
KGO
By Liz Kreutz
SAN FRANCISCO (KGO) -- As the events in Washington unfolded on Wednesday, photos from inside the Capitol went viral around the world. Many of those now-iconic images were taken by Getty Images Chief Photographer Win McNamee.

McNamee captured the widely shared photo of a rioter dangling from the Senate chamber, and the image of another rioter carrying Speaker Nancy Pelosi's lectern through the halls. That man has since been identified as Adam Johnson, 36, and was arrested in Florida two days later. 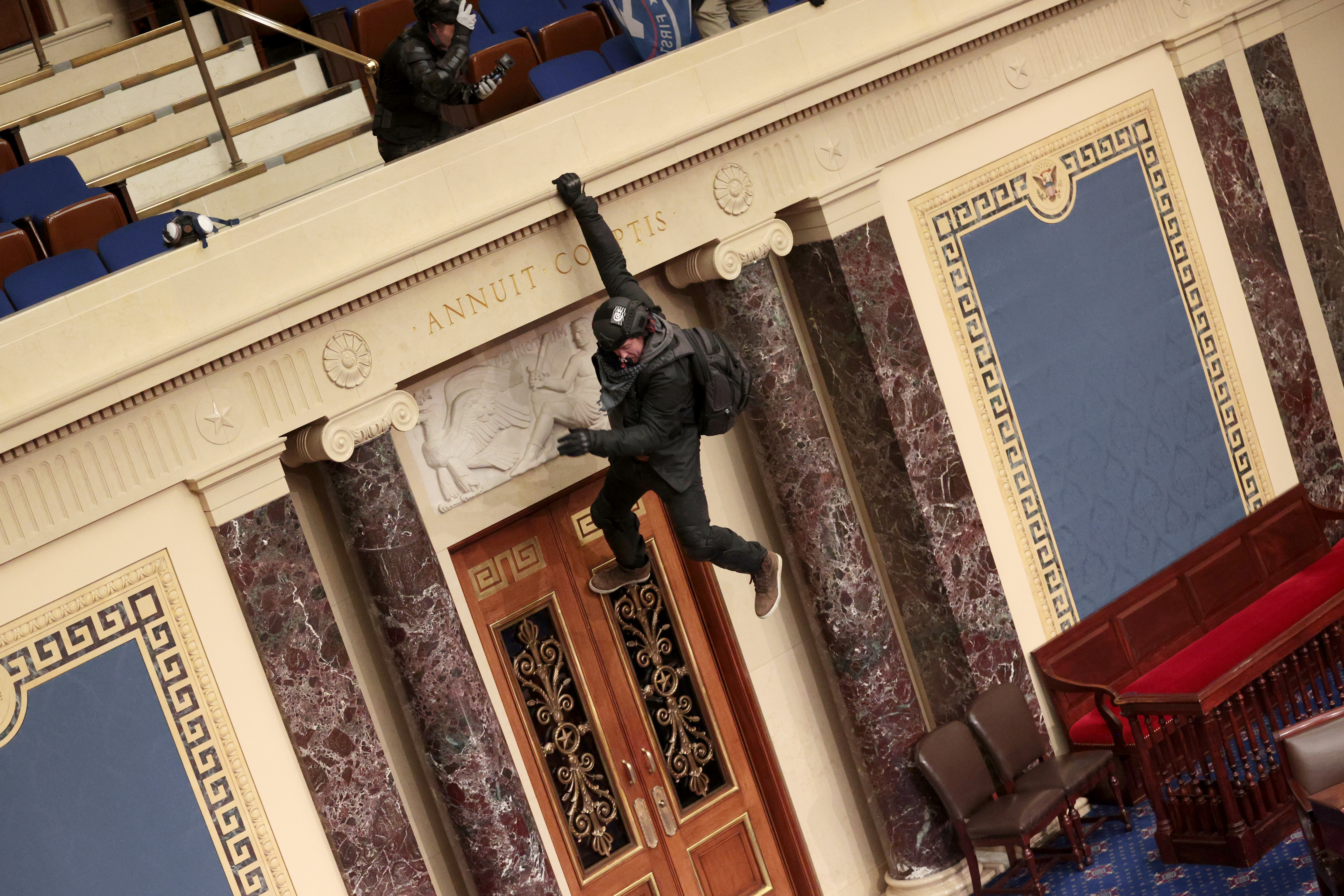 In a one-on-one interview with ABC7 News, McNamee described what it was like to document this historic day.

"The scene in the rotunda, it was complete mayhem," McNamee said. "People were entering from multiple directions...people were climbing on these historic statues, posing for selfies, chanting."

It was in the rotunda that McNamee saw Johnson carrying a podium and began taking pictures.

"He noticed that I was doing so, and turned to wave like it was, I don't know, a holiday photo of some type," McNamee recalled, still somewhat surprised by it all. "And I think it's reflective of this sort of, when people get into a mob of this size, they lose common sense, frankly...and I think there was a lot of this that day."

McNamee has covered Washington, D.C. for three decades. His father was also a longtime D.C. photojournalist. He said he never could have imagined anything like this -- especially in the U.S. Capitol. 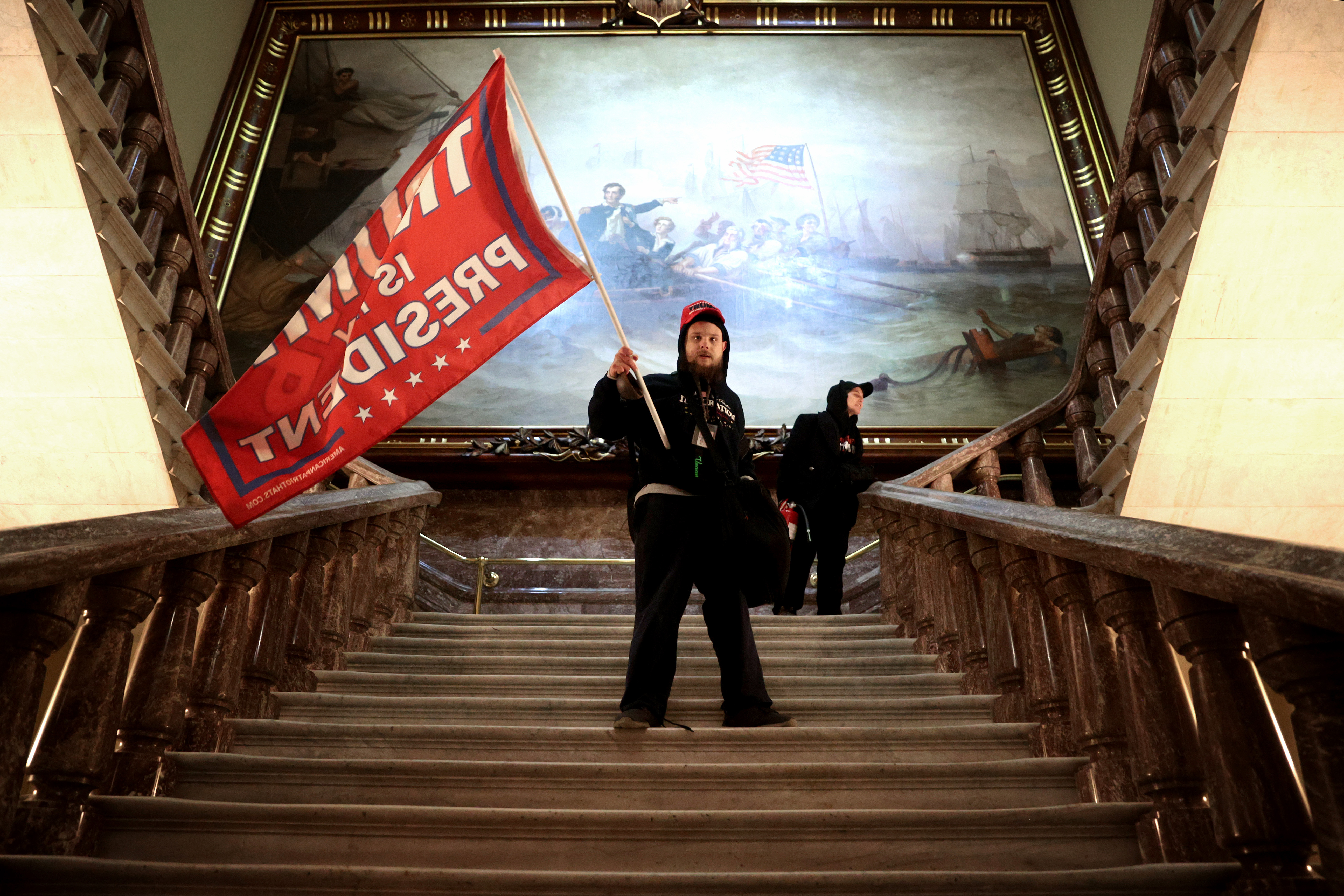 This image, taken Jan. 6, 2021, shows a man with a Donald Trump flag at the U.S. Capitol as rioters stormed the building.

"There's a large amount of decorum that is part of the process, and it's a very regimented venue for the most part, so that's the opposite of what happened on Wednesday." he said. "To see the place overrun on Wednesday was disturbing and alarming and just something I never expected to take place."

He believes his father would have felt the same. "It's just kind of a reflection of the divisiveness and the extremism that we've seen in this county over the past 15 years, or so, and hopefully it marks a potential turning point," he added.

McNamee said a couple rioters asked him where he worked but he never felt threatened. He believes that could be, in part, because, "it's hard to refute the accuracy of a photograph."

Of all the photos McNamee took that afternoon, he said the one of a rioter dangling from the Senate chamber and trying to get down to the main floor is his personal favorite. "It just highlights the chaos and the out of place nature of what took place that day," he explained.

McNamee said he's blown away by the work of all his colleagues that day.

"The work that was produced by all of the news photographers who were working at the Capitol that day, I think, is a remarkable testament to the power of photojournalism," he told us.
Report a correction or typo
Related topics:
politicswashington dcdonald trumpriotus capitoljoe bidenphotographyelectoral college
Copyright © 2021 KGO-TV. All Rights Reserved.
More Videos
From CNN Newsource affiliates
TOP STORIES