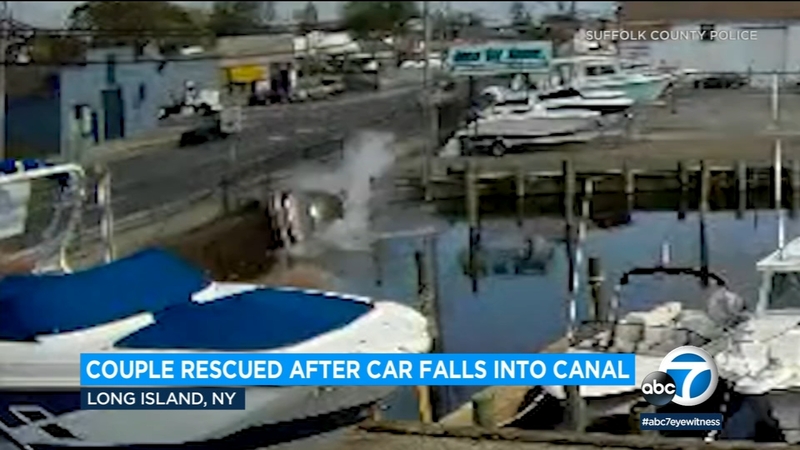 LINDENHURST, Long Island -- Three police officers and five good Samaritans are being hailed as heroes for rescuing a couple from a car submerged in a canal after a collision sent the vehicle careening into the water in New York.

One of the involved vehicles, a 2016 Subaru operated by an 85-year-old man, then backed into the eastbound lane of Montauk Highway, where it struck a third car, a 2004 Mercury Marquee, operated by 78-year-old Joseph Abitabile with his 76-year-old wife Delores as a passenger.

As the result of the secondary collision, the Mercury was propelled through a fence and into the canal.

The Suffolk County Police Department released the following video of the crash and rescue:

Within seconds, several good Samaritans -- including off-duty Suffolk police Officer John Tighe -- jumped into the water. At that time, the car was only partially submerged.

"When I see the guy underwater, I say, 'This is my father or somebody's father,'" said good Samaritan Mustafa Tosun, who works at a gas station across the street. "I had to do something. I didn't care."

Those in the water attempted to break the glass of the car using a cinderblock, before Gearon was able to to break the back windshield with a spring-loaded center punch.

She was pulled from the car with no pulse, but Lake Success Officer Robert Russo performed CPR and was able to restore her pulse and breathing.

The Abitabiles, one good Samaritan, the two Suffolk County police officers and the driver of the Subaru, 65-year-old Morris Kramer, were transported to a hospital for treatment of non-life-threatening injuries.