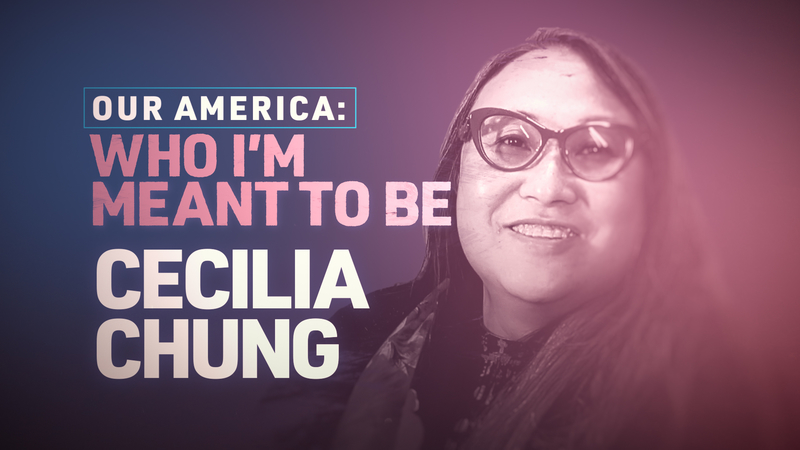 SAN FRANCISCO -- Don't give up. That's what trans activist Cecilia Chung said she would tell her past self as she reflects on her journey from homelessness to policy advocacy.

"Your parents might not understand you, but it doesn't mean they're not trying ... Just let them know that you are going to be alright. You're going to grow up to be a good person, a happy person, a successful person, and none of that has to do with who you are, whether you're a man or a woman," Chung said.

Chung spent her childhood in Hong Kong, where she was born in the 1960s. Chung describes her childhood as average but says she felt misunderstood at an early age.

"They would consider me a problem child because I liked to argue a lot. I had this whole feeling of 'different' that I didn't know how to tell them," Chung said.

Chung realized she was attracted to boys in grade school. She recalls a boy kissing her while they waited in line to turn in a report. She liked it and, in her teenage years, though it meant she was gay.

But she wouldn't realize she was a transgender woman until she was 22 years old and far away from home. It was a truth she struggled to share with her parents.

As she walked through her San Francisco apartment, she pointed out her personal spiritual altar. It has pictures of her grandparents and father, who have all passed away.

"Because of coming out as a woman to my parents, we had a big fight. We ended up not on speaking terms for over three years," she said. "I wish it was different, of course. I wish they understood the difficulties of being me."

Chung, however, was searching for community: "This is where the gay community was. I knew when I came up here I would find people I could relate to."

After graduating, she began working as a court interpreter and took on a second job at a financial company.

When she began to transition, Chung said, she lost everything. Within months, she was out of friends' couches to stay on and experienced homelessness for the first time in her life.

Chung soon started relying on survival sex work in San Francisco's Tenderloin neighborhood to take care of herself. Then came the drugs to cope with the pain of the world failing her, and within a matter of months, she learned that she was HIV positive.

"It sounds painful, but it's actually more painful to not know who you are. I would rather be really trying hard to survive than to look in the mirror and not see myself," Chung said.

Her life found meaning in 1995 when she was assaulted by two men attempting to sexually assault her. As Chung fought back, one of the men stabbed her. She was rushed to the emergency room with punctured tendons and arteries.

She openly discusses the attack and showed crime scene photos of a blood-stained red car the men forced her into.

"It was a blessing in disguise because that was also the time when the reconciliations between my family and I began," Chung said.

1995 was also the year Chung changed her name to Cecilia. She recalls the difficult conversations she had with her mother the days after the stabbing. Chung's mother came to the hospital after a nurse called and alerted her of the attack.

"That was a very difficult conversation that I had with my mother, especially about me becoming a woman," Chung said.

We caught up with Chung's mother as Cecilia picked her up from the retirement community she now calls home. They were on their way to grab dim sum at their favorite restaurant.

The mother-daughter pair frequent the restaurant on their weekly lunch dates.

"She was very unhappy when she was a boy, and now she's completely changed," Chung's mother, Dawning, said outside the restaurant.

"What can I say? I love her and she loves me. That is all that is needed for a mother," she continued.

Chung's mother said she is contacted by parents of transgender children from all across the world asking her for advice.

The folks who reach out likely heard of Chung through her nationally recognized human rights works. Others have seen the ABC eight-part docudrama "When We Rise" that followed the history of LGBTQ+ rights advocacy. Chung's story was prominently featured in the miniseries.

Today she works as director of evaluation and strategic initiatives for the Transgender Law Center.

She helps the center navigate which battles to fight in a year that has seen an explosion of anti-trans legislation introduced in statehouses across the country.

Chung called the legislation "disheartening" and said the center is monitoring the bills.

The Transgender Law Center was founded in 2002 as a local advocacy organization serving the Bay Area and quickly grew into a statewide -- and now national -- organization.

The TLC won the 2016 Whitaker v. Kenosha Unified School District case that guaranteed transgender students protection under Title IX of the Education Amendments of 1972 and the Equal Protection Clause of the constitution. The case was about a transgender teen being denied access to the male-designated restrooms at his high school.

Chung said understanding this uphill battle many trans people face is what inspired her to get into policy advocacy.

"Seeing the inequality and the inequity in the systems and how little transgender people get as resources, how many hoops they have to jump through in order to get services," she said.

To help improve these outcomes, in 2015 Chung founded the network Positively Trans to address inequities, stigma, and discrimination against transgender people living with HIV.

However, Chung said one of the greatest threats to the trans community remains anti-trans violence. According to the Human Rights Commission, 44 transgender and gender non-conforming people were killed in 2020, making it the most violent year on record.

So far in 2021, 27 transgender or gender non-conforming people have been killed, with the majority of the victims being Black and Latinx transgender women.

The HRC started tracking these crimes in 2013 and acknowledges that often these incidents go unreported or misreported.

"The only way that we can really create change is not just changing peoples' minds. We also need to find ways to change peoples' hearts," Chung said. "If everyone realized that they might have a friend, a cousin, a co-worker, a mother, a father, a son, or daughter or grandchild who is transgender, maybe that will start shifting some of these conversations."

During a tour of her apartment, Chung walked to a bookcase adorned with awards and a signed picture with former President Barack Obama at the White House.

It's a group shot of Chung and three loved ones that makes her light up.

They are her three adoptive kids. No, there's no paperwork involved, but to Chung, this chosen family means the world.

"Creating these kinds of chosen families with a mother or father figures or someone that the younger folks can look up to is crucial because they need role models. We need to be able to share some hope with them," she said.

"What I really love is how colorful our community is. Looking at the kind of identities and expressions...people have been transforming," Chung added. "We are seeing kids now that are very creative with their gender expression. It just shows the possibilities are limitless."