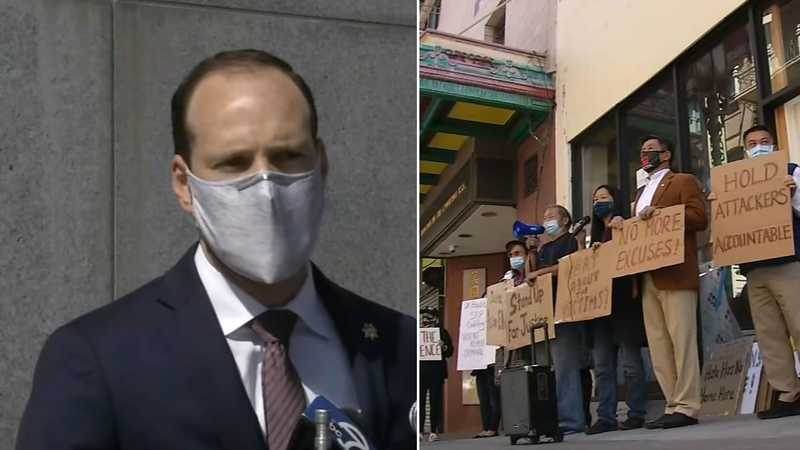 SAN FRANCISCO (KGO) -- Nearly a week after a brazen assault and pepper spray attack on a Chinatown business owner, community members and media gathered, expecting to see San Francisco District Attorney Chesa Boudin appear at the store. Boudin did not appear, leaving some wondering why.

The turn of events that led to Thursday's gathering happened Saturday when Fanly Chen, owner of a cellphone accessories store along Grant Avenue in Chinatown, stopped an alleged teen from shoplifting.

San Francisco police tell ABC7 News that Fanly was then assaulted by the suspect, who later returned to the shop and was seen on surveillance spraying a substance into Fanly's eyes.

"...(He) just walk in and spray me...look! Turned around and spray me and he's gone" says Fanly as she narrates what happens in the video.

When asked if it was a painful experience, she says it was "very painful...trust me. At first I thought I might (go) blind."

Members of the media staged outside Fanly's shop Thursday morning after word spread District Attorney Chesa Boudin would be making an appearance.

Boudin has appeared at Asian American events such as rallies and marches in recent weeks in a show of support against the attacks on the AAPI community.

It's a move seen by certain Asian Americans and community groups -- such as the United Peace Collaborative -- as doing damage control for what they say is his lack of attention to prosecuting repeat offenders.

Boudin never ended up showing up at the store and instead the growing group was met with members of the DA's office, who hurried inside to meet with Fanly and members of the Chinatown Merchants United Association. The press was instructed to stay outside, citing the need for privacy due to the suspect being a minor.

Afterward, members of the DA's office declined to comment, with one saying "I'm not supposed to talk," before scurrying away.

Fanly says she's pleased with how the discussion went but couldn't reveal details.

When asked if she expected the DA to be there, her response was different than what it was earlier in the morning. "No, I didn't think he could come in here."

Others in the community clearly did, such as Leanna Louie, head of the United Peace Collaborative, which rallied members to chant and hold signs asking for Boudin to take action and hold Fanly's perpetrator accountable.

"She (Fanly) said he was going to come visit and talk to her....I'm not sure why he didn't show up."

We reached out to the DA's office on why Boudin did not appear or if he was ever slated to. As of time of publication, we did not receive a response.

Whatever the case, Fanly and merchants like Nancy Yu just want one thing so crimes like what happened over the weekend won't happen again.

"We want a safe and inclusive community."

Fanly's alleged perpetrator is expected to make an appearance in court Friday.