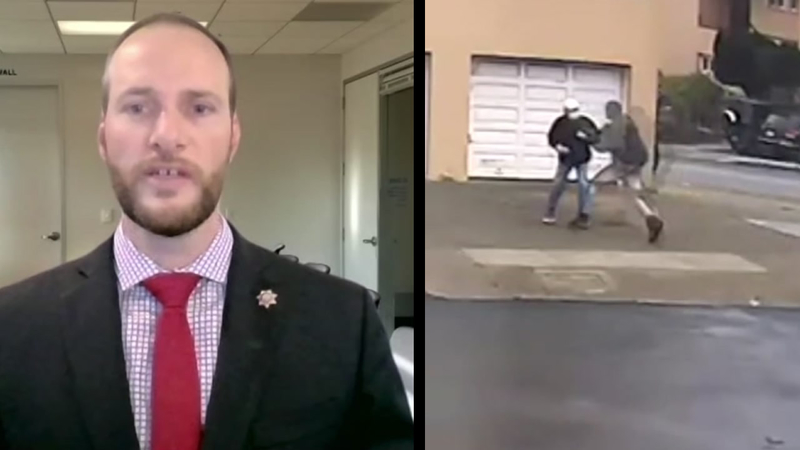 SAN FRANCISCO (KGO) -- There is outrage over San Francisco District Attorney Chesa Boudin's description of the man police say pushed over and killed an 84-year-old in San Francisco.

In a New York Times article, Boudin says Antoine Watson was having "some sort of temper tantrum," a term more often used to describe toddlers.

He's endured a lot of skepticism since his death and now he and his wife, Monthanus Ratanapakdee, are grappling with feelings of disgust after learning of Boudin's comments.

"It's breaking my heart" says Monthanus, as she clutches a framed image of her father while dressed in head-to-toe black along Anza Vista and Fortuna Avenues, where the incident occurred Jan. 28.

ABC7 News anchor Dion Lim was the first to break this horrifying video, showing Vicha shoved to the ground and killed by, according to police, 19-year-old Watson, who was arrested for murder and elder abuse.

Shocking new video coming out of Oakland's Chinatown showing a man senselessly pushed to the ground has the community on high alert.

In the Times article, Boudin cites video evidence where Watson is allegedly seen hitting a car with his hand.

Monthanus does not accept that as an excuse.

"A temper tantrum... you can hit a car...you cannot hit or kill a human," Monthanus.

Lim obtained police documents indicating after the crime, Watson was seen on video returning to a BMW, retrieving a phone, walking back to Ratanapakdee and appeared to take photos of his body. He is then seen returning to the vehicle and gets inside.

Lim has reached out to Boudin a number of times asking for comment on stories since conducting a live interview with the DA over the double fatal hit-and-run deaths of Hana Abe and Elizabeth Platt.

Those emails were never responded to, neither was one today, asking for Boudin to clarify his statements to the Times.

As Vicha's loved ones wait for Watson's next court appearance on Thursday, they expressed their gratitude for the community's support. And want two things.

"I want to know the truth, a clear truth," says Eric.

After placing flowers at her father's makeshift memorial outside a garage where the crime happened, Monthanus made references to the many attacks on Asian Americans in the Bay Area and around the country.

A GoFundMe set up by the family will continue to collect funds to pay for a possible billboard or mural to raise awareness of violence toward the Asian community and to help start a college fund for Vicha's two beloved grandchildren.
Report a correction or typo
Related topics:
san franciscoattackelder abuseelderlyman attackedasian americansan francisco county
Copyright © 2021 KGO-TV. All Rights Reserved.
More Videos
From CNN Newsource affiliates
TOP STORIES