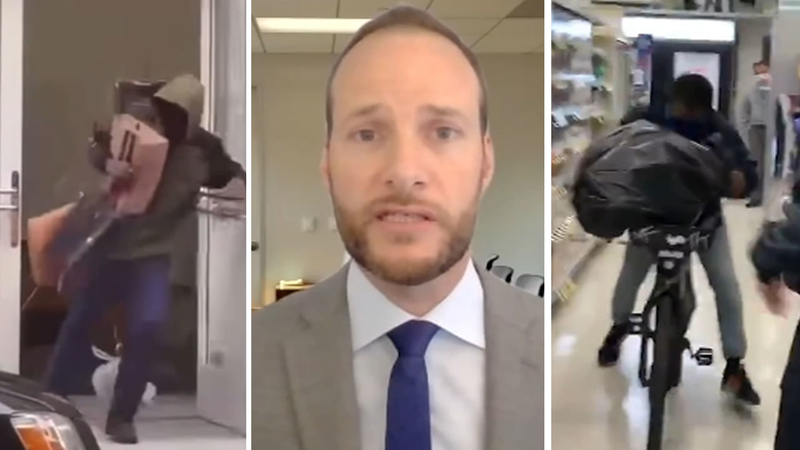 What is SF doing to fight theft? SFPD and Chesa Boudin respond

SAN FRANCISCO (KGO) -- In the wake of several viral videos of theft and burglary in San Francisco, the San Francisco Police Lieutenant with the Burglary Auto Unit and District Attorney Chesa Boudin are explaining how the city is responding.

Hundreds of thousands of people have watched the video of ten people running out of San Francisco's Neiman Marcus with arms full of Saint Laurent high-end handbags.

"They'll stop at nothing to get in, get out and get away," said Lt. Scott Ryan.

He said the people seen in the video are organized criminals, filling an order for the items they're stealing and then fencing sometimes on re-sell sites like Poshmark, The Real Real and Fashionphile.

"I'm just not going to share those with you because I don't want those out there," said Lt. Ryan.

In an emailed statement, a spokesperson for The Real Real writes, "We work closely with local and federal law enforcement to prevent the trafficking of stolen goods. Through LeadsOnline (the country's largest online investigation service), we give police departments nationwide full visibility into our inventory, including details like serial numbers, photos, and data and location of consignment that can help prevent the sale of stolen goods."

San Francisco investigators are working with task forces up and down the Bay Area. They said the Neiman Marcus incident wasn't likely a one time hit.

It's also not just department stores being targeted. Retailers like Target and Walgreens are also dealing with theft. Videos of crimes in progress highlight the problem in San Francisco.

"It is sad and there is a need for us to do something about it and part of it is accountability. People have got to be held accountable for the crimes that they commit," said San Francisco Mayor London Breed earlier this week.

"When police bring us cases that have chargeable evidence of crimes that were committed including shoplifting, petty theft and certainly organized retail crime, we take action in the vast majority of those cases," said Boudin.

Boudin said his office recently filed 15 charges against the suspect who stole from Walgreens.