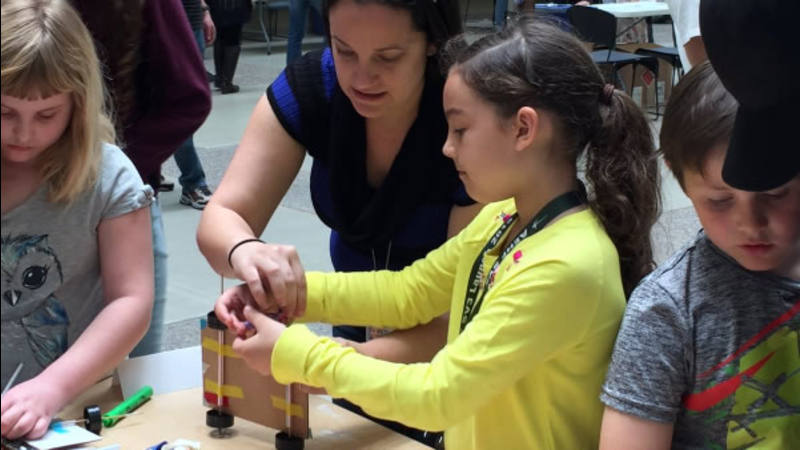 SUNNYVALE, Calif. (KGO) -- Lockheed Martin employees in Sunnyvale brought their sons and daughters to work Thursday to inspire them to consider STEM careers.

Marlena Miller, 10, sat a table in the middle of a field as she looked over a number of rockets laid out because she had to pick one to do a test launch.

The fourth grader chose a sleek blue one with small fins. She clearly seemed to understand the concepts of drag, resistance and aerodynamics. "It's going to fly higher than the others," she said.

Marlena's father is a mechanical engineer at Lockheed Martin, who might have imparted some sophisticated knowledge to his daughter at some point. However, Marlena made the decision on her own and she was right. It soared high into the sky, falling back to the ground with a parachute that deployed to slow its descent, so the mission was accomplished.

Marlena is one of about 1,000 young people, all children of Lockheed Martin employees, who came with their father or mother to work for "Young Minds at Work" Day.

A total of 45 activities were set up to engage the young people to learn how science, technology, engineering and math play an integral part in space launches and other missions.

The young people took tours, but spent much of their time engaged in hands-on experiments involving augmented reality and even drones.

Besides rockets, they launched water filled bottle rockets, explored Mars using augmented reality goggles and tested their drone navigational skills. But rockets seemed to captivate the most. "A lot of the kids who come back here remember which rocket they used last year, and they want to come back and fly that exact same rocket again," aeronautical engineer A.J. Nieves said.

Nieves said he went to space camp when he was 12 years old, setting him on a path leading to a career as an aeronautical engineer and he's hoping to excite these young people in the same way.

From 8 a.m. to 2 p.m., they wandered around the huge Sunnyvale campus where 220 volunteers engaged them in learning that was also fun. "To showcase this to young kids and to inspire engineers, mathematicians or scientists one day is absolutely amazing and I couldn't be happier to support this event and to host it," Lockheed Martin employee Elizabeth Pascetta said.