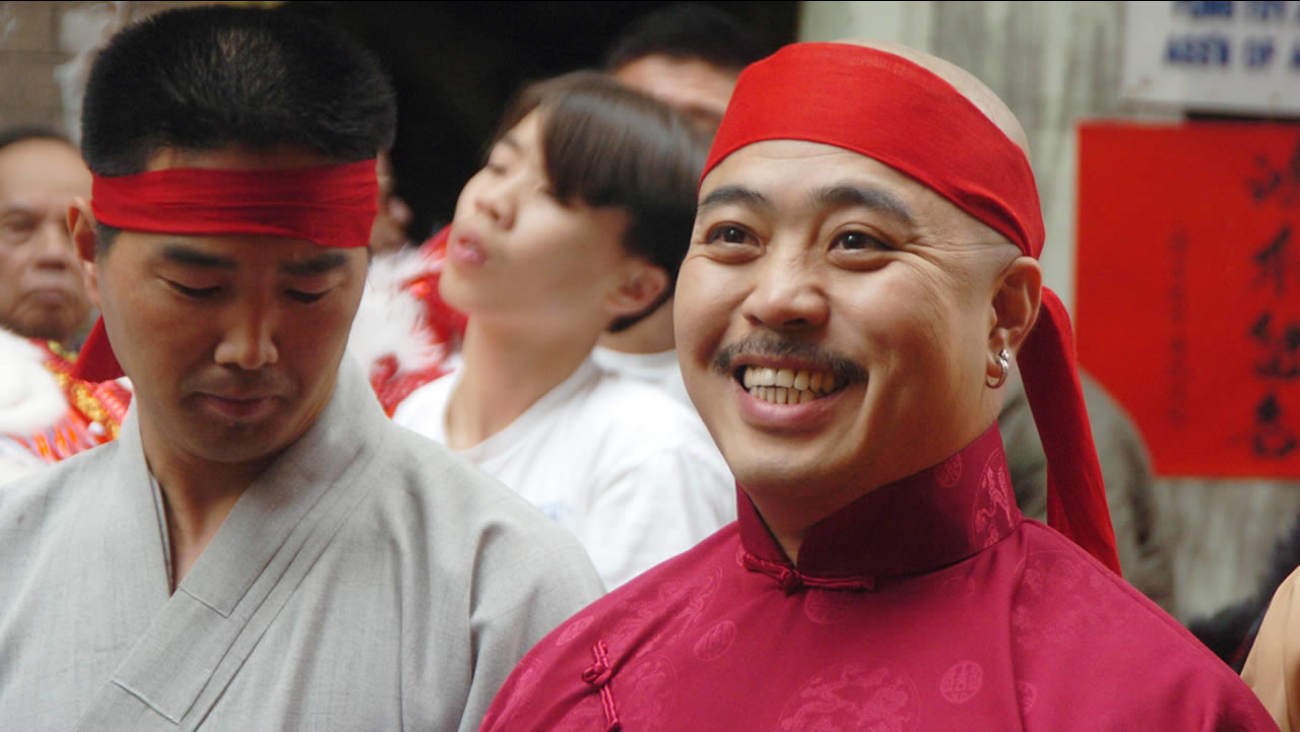 In this Aug. 6, 2006 file photo, Raymond "Shrimp Boy" Chow is shown after being sworn in as the "Dragon Head" of the Chee Kung Tong in Chinatown in San Francisco. (AP Photo/Sing Tao Daily, File)

Chow, 54, is accused of money laundering and plotting to sell stolen goods as the "dragonhead" or leader of the Chee Kung Tong, an organization infiltrated by FBI agents posing as Mafioso that led them to discover a wide range of criminal activity by 29 defendants, including Yee and former San Francisco school board president Keith Jackson, according to the March 27 criminal complaint.

Chow has a lengthy criminal history dating back to the 1970s and was most recently released from federal prison in 2003 after testifying in a case against another organized crime leader, Peter Chong.

Veteran defense attorney Tony Serra, who is representing Chow, said that Chow reformed after his release from prison. Serra sought to demonstrate during a nearly two-hour detention hearing today that Chow had become a respected community leader in the last decade.

Serra made the unusual move of calling several witnesses in the bail hearing to give statements on their relationship with Chow and his standing as a good citizen, including Chow's next-door neighbor, author Caroline Paul, and filmmaker Nick Lee, who said he sought Chow's help in making a movie set in Chinatown.

About 10 people stood when directed by Serra to show their support for Chow, who appeared in court surrounded by his three attorneys, clad in green and gold jail clothing, his head shaved except for his thick dark eyebrows.

A Cantonese translator assisted Chow, who smiled frequently during the proceedings.

While several witnesses said that they had read at least portions of the criminal complaint when questioned by federal prosecutor William Frentzen, none said they had any knowledge of the events or indication that Chow may have been involved in any illegal activity.

Lee said he became interested in Chow because it was "intriguing to me that he was a changed man and willing to help out in the community."

"Every time I've been around Raymond he's shown nothing but love and compassion," he said.

As Frentzen cross-examined the defense witnesses, Serra and two other defense attorneys -- Curtis Briggs and Gregory Bentley -- frequently jumped in with objections, something U.S. Magistrate Judge Nathanael Cousins said was not permissible.

"I'm not going to allow the three-attorney monster," Cousins said.

Briggs also summarized a statement by two witnesses who attended court but did not submit to questioning. Frentzen indicated that both witnesses, including Chow's girlfriend Alicia Lo, could be called as prosecution witnesses during a trial.

Lo's statement, as read by Briggs, painted Chow as a giving man who helped a variety of community causes, including elementary school children, and questioned the veracity of the criminal complaint.

But Frentzen said that Lo had multiple contacts with the FBI informant during the investigation and indicated to him that she was aware of Chow's activities and even that she had pursued him because he was a gangster.

Frentzen called Chow's decades-long criminal history "nothing short of horrendous" and "one of the worst criminal histories ... that I've ever seen."

He said that because of that history, and the allegations that Chow was the purported leader of the organization driving the criminal activity, meant that Chow was a greater danger to the community than Yee or Jackson, who were both released on bail despite being indicted for weapons trafficking charges.

The prosecutor also argued that Chow was a flight risk as his organization spanned across the U.S., with connections in New York City and even internationally.

Chow's reputation as a community leader could have been a lesson he learned from Chong, who taught Chow that he could conduct illegal business easier if he projected himself as a strong community member, according to Frentzen.

"This is a way of covering up basically that Chow was taught decades ago," Frentzen said.

While the judge said that Chow's decade with a court-ordered ankle-bracelet monitor indicated that there were ways to prevent him from being a flight risk, he agreed with Frentzen that the allegations indicate that he would be a danger to the community if released.

Cousins said he believed the testimony of the witnesses and what they perceived of Chow, but said that he thought they had either not seen the full picture of him or had been deceived. He ordered Chow to remain in custody.