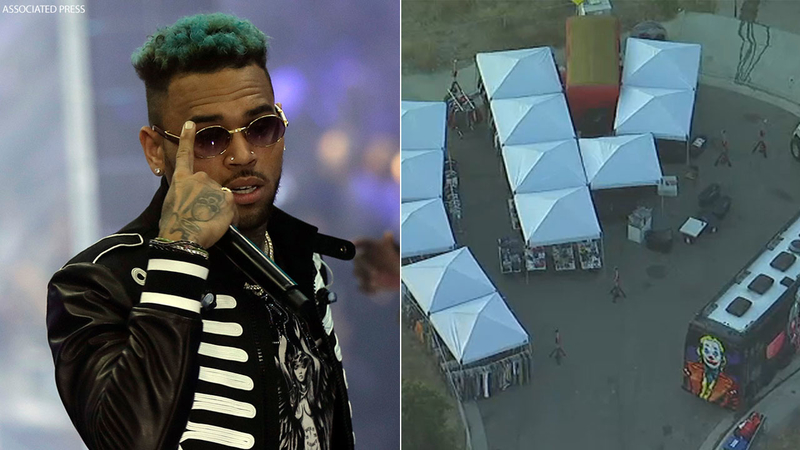 LOS ANGELES, California -- Chris Brown held a yard sale at his home in Los Angeles Wednesday and promoted the event by sharing his address with his more than 88 million followers on Instagram and Twitter.

The sale is being held until 7 p.m. PST at Brown's home, according to the flyer. Brown added it will be a "2 day event" but did not release details about the second day.

A press release stated the sale includes items that are "either new or have been worn by Chris Brown in music video shoots, red carpet events and etc." According to the statement, a portion of the proceeds will be donated to several non-profit organizations that Brown supports.

Los Angeles police said officers had been assigned to the location, and security guards were also on hand. Officers at the scene initially said the sale could be shut down by the Los Angeles Department of Building and Safety due to trucks transporting items in and out of the home, which is in violation of city code, but the event was proceeding without incident as of Wednesday afternoon.
About two dozen people had already arrived at the home by 5 a.m., including a fan who said he drove down from San Francisco overnight.

"Just getting a chance to come here is just all fun within itself," he said. "Just to get a chance to own a piece of something that he has would honestly just be a great thing to have, like, in a collection for myself."

Other fans said they were looking to profit off of the sale.

"I wanted to see what he has, good merchandise like purses, all that stuff, so I could sell or keep it for souvenirs," Sacramento resident Kameko Meja said.

One bargain shopper said he purchased a pair of sneakers reportedly worn by Brown for $35 and hoped to sell them online for $500.

Footage from our sister station KABC-TV showed a line to his home wrapped around the corner and down the street. Merchandise was set up under a dozen tents next to a tour bus with graffiti featuring The Joker and other characters at the end of a cul de sac in front of the home.

The Grammy-Award winning singer previously shared his home address online during a spat with Offset in February in which he urged the Migos rapper to fight him claiming, "My address ain't no secret spot."

Brown's six-bedroom house has made headlines over the years, including last year when California Department of Fish and Wildlife agents seized an illegal pet monkey and in 2015 when armed suspects broke in and locked Brown's aunt inside a closet while they ransacked the home.

Since moving to the home in 2015, Los Angeles police received several complaints from neighbors about Brown, including in 2016 when residents claimed he was riding an ATV and doing doughnuts around the neighborhood.