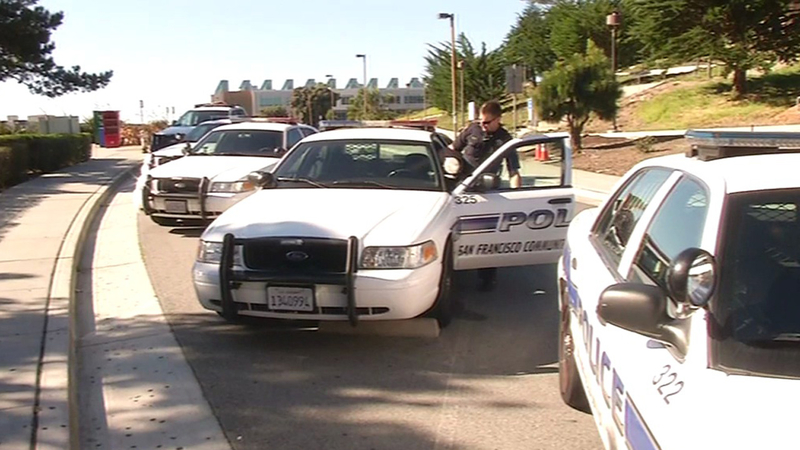 SAN FRANCISCO (KGO) -- The dispatch call college police departments fear most of all is an active shooter on campus. City College of San Francisco does have a police department, but its officers are armed - not with guns - but with pepper spray and batons. ABC7 News learned that the college will soon be reviewing that longstanding no gun policy.

On October 14, City College of San Francisco campus police receive a call regarding a man with a gun at the library. Students in the library ducked for cover or ran and the reported gunman got away without any shots being fired. It took campus police only one minute to respond, but they were unarmed. So they had to wait for San Francisco police to arrive with their guns and that took another three to five minutes.

Lawson is head of public safety at University of San Francisco. He said standard police protocol for active shooters is very simple.

"They go in there and stop the threat, if at all possible, rather than waiting for special weapons teams and other teams," said Lawson.

But City College police officers such as Igor Boyko are not allowed to carry guns.

"We're supposed to contact SFPD and basically wait for them to arrive and take care of the situation," Boyko said.

Almost all of California's community colleges arm their police, but City College of San Francisco with its 11 campuses and 80,000 students is gun free, a policy which its officers said makes it difficult for them to do their job.

"What they mean by gun free is that the police don't have guns. It doesn't mean that on a daily basis people aren't bringing guns to these campuses," said former CCSF Police Chief Carl Koehler.

Koehler said he tried without success to convince the college to arm his officers.

"That's one of the reasons I resigned because the college really never took a serious look at it," Koehler said.

But with increasing gun violence on campuses across the country, the debate is heating up again. It was front page news in the student paper. Some students want it and others fear abuse if they're armed.

"It forces the law enforcement to use other resources instead of resorting to extreme force," said Jesse Geist, student.

Boyko told ABC7 News all this has affected morale. "Very frustrated, very angry, confused as far as what they want us to do," he said.

Officers there wonder if the policy will ever change.

Athena Steff is with the Service Employees Union which represents them. "At the end of the day when is the right time? Do you wait till heaven forbid, do you wait till someone is hurt," Steff said.

Interim City College Chancellor Susan Lamb said it's a complex issue with strong feelings on both sides. "I think there are ways you can be safe without necessarily carrying guns, but I think guns are an added safety measure," Lamb said.

Lamb said she plans to make a recommendation to college trustees in a few months.