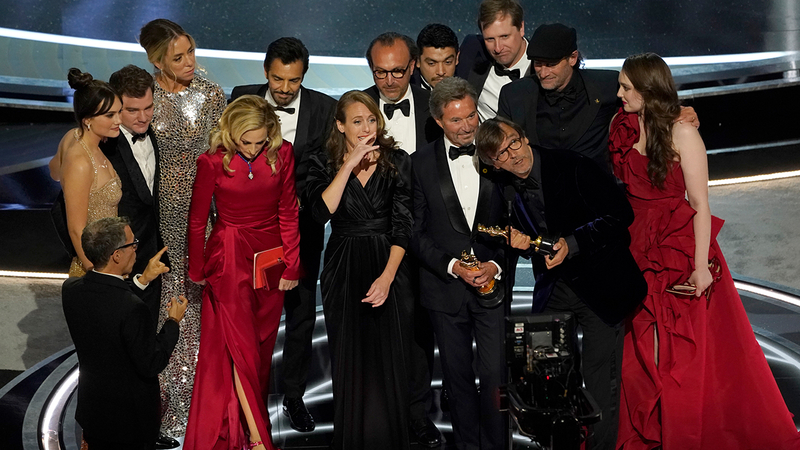 LOS ANGELES -- Until Sunday night's Oscars, Marlee Matlin had for over three decades been the only deaf person to receive an Academy Award.

That streak broke Sunday at the 94th Academy Awards, when Troy Kotsur, Matlin's costar in the movie "CODA," earned a best supporting actor Oscar for his role, becoming the first deaf man to win an Academy Award for acting.

"CODA" also walked away with the coveted Best Picture honor, a historic win for the deaf community and the first film distributed by a streaming service, in this case Apple TV+, to win best picture.

"I'm so happy because finally, this validates that everyone is respecting our work as actors in every way," Matlin told ABC News' Lara Spencer backstage after "CODA" won for best picture. "It's been 35 years and I've been waiting for another deaf actor to join me."

In a bizarre moment at the Oscars, Will Smith slapped Chris Rock in the face after he directed a G.I. Jane joke at Smith's wife and actress Jada Pinkett Smith.

Matlin won the Best Actress Oscar in 1987 for her role as Sarah in the movie "Children of a Lesser God."

"I've been waiting for another movie with this message similar to ours to come out, and it hasn't happened," she said. "I just am hoping this opens the floodgates."

"CODA" made history as the first film with a largely deaf cast to win a best picture Oscar.

The film follows the story of a 17-year-old girl named Ruby Rossi (Emilia Jones), who is a CODA (child of deaf adults) and the only hearing member of her family. Ruby's family -- father Frank (Kotsur), mother Jackie (Matlin) and brother Leo (Daniel Durant) -- depend on her to communicate with others, especially when it comes to running their fishing business, but she has dreams of attending music school and becoming a singer.

In his acceptance speech, Kotsur thanked the deaf theater community, saying, "I want to thank all the wonderful deaf theater stages where I was allowed and given the opportunity to develop my craft as an actor."

Backstage, Kotsur told Spencer the "most touching moment" of the night for him was the standing ovation he received when his name was announced.

As Kotsur made his way to the stage, people in the audience silently signed their applause, as they did too when "CODA" won best picture.

"I felt like I felt this warmth in the room," he said. "It felt like we were a family and a community, and it was such a special moment and that really touched me."