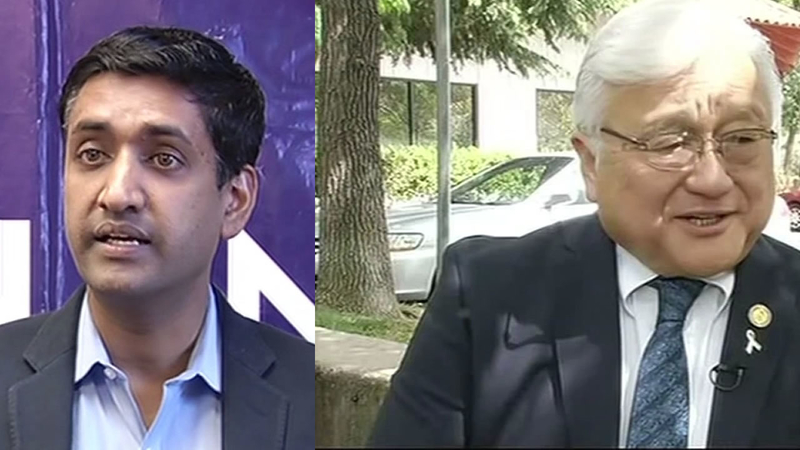 FREMONT, Calif. (KGO) -- It has been a contentious campaign from the start and one of the most watched congressional races in California, pitting a veteran democratic leader in the South Bay, Mike Honda, against a newcomer, also a democrat, who worked in the Obama administration, Ro Khanna.

The rhetoric ramped up even more on Friday with Khanna calling for an investigation into possible ethics violations by a Honda staffer.

"Pay to play allegations are of the most serious kind in our democracy," said Khanna. The challenger to longtime San Jose democrat Honda, Khanna is trying to capitalize on allegations that a Honda staffer offered prospective campaign donors prime seats at a State Department function in early 2013.

"What we're saying is no one is allowed to trade on the public assets, that belong to the taxpayers, the State Department, for personal gain in a campaign," explained Khanna.

The allegations stem from emails Honda's Chief of Staff allegedly wrote from her personal Gmail account to the congressman's then-campaign chairman. Obtained by the Metro Newspaper and SanJoseInside.com, they refer to possible invitees to a State Department roundtable and identify them as potential campaign donors.

In an email to ABC7 News, Honda's current Campaign Communications Director, Vivek Kembaiyan wrote: "Congressman Honda expects his staff to adhere to the highest ethical standards. In this instance, while not a violation of House Rules, he believes staff should have taken more care to prevent the appearance of coordination."

Nonetheless, two elected city officials from Honda's district have written a letter complaining to the Office of Congressional Ethics."If Congressman Honda didn't know about the improper behavior taken by his office, then we need to find out who is actually in charge," claims Rob Sinks, the Vice Mayor of Cupertino.