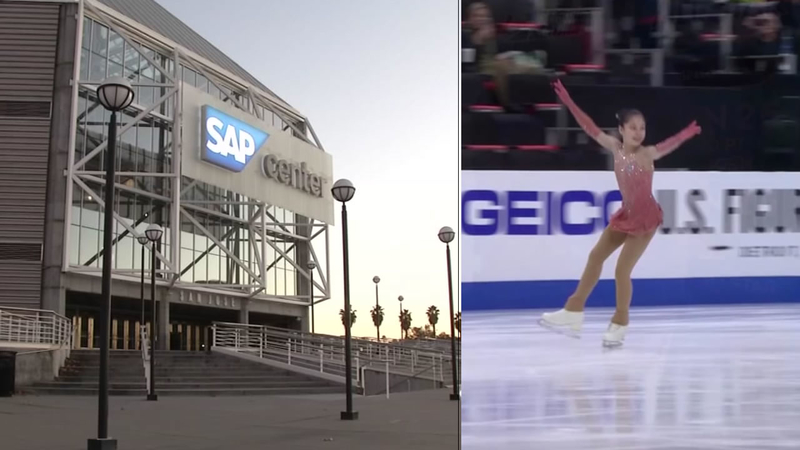 U.S. Figure Skating Championships to move from SJ to Vegas

SAN JOSE, Calif. (KGO) -- The U.S. Figure Skating Championships are being moved from the SAP Center in San Jose to the Orleans Arena in Sin City.

The announcement was made on Monday by U.S. Figure Skating and SAP Center.

"Both of these decisions were made unanimously by the U.S. Figure Skating Board of Directors at its Nov. 7 meeting," the announcement continued.

"Some of the greatest names in figure skating come from Northern California," SJSA Executive Director John Poch told ABC7 News. "As difficult it is to lose it, I understand. The safety of our community, safety of the athletes involved are first and foremost. So, I understand. The only silver lining is we have it coming back in 2023."

When asked about what opportunity the South Bay might be losing with the move to Las Vegas, Poch answered, "It's a global audience. The exposure and visibility is big for our area and our region. It's also a sense of pride that sports bring to get you out of the everyday world, and your chance to enjoy the championship."

The news was announced on Monday, the same day Santa Clara County said it saw a spike in COVID-19 cases.

California's cases aren't peaking at the moment, but there are signs that coronavirus is starting to spread more quickly in the state.

County leaders said 358 new cases were reported on Sunday, just shy of the daily peak of 385 in mid-July. This comes as more cases are being reported across California, which could have devastating health and economic ramifications.

"The rate of change has been very steep and that is a concern," County Public Health Officer, Dr. Sara Cody said on Monday. "We've seen this before and it got us into trouble."

Poch said during the pandemic, SJSA is no different from educators trying to teach a class, or small businesses trying to survive.

"To me, every week is a month, another month of Mondays," he explained. "So, we just focus on our planning."

Poch said SJSA first announced it would be hosting the U.S. Figure Skating Championships more than a year and a half ago.

"Just the buzz from the Bay Area athletes that were competing, our ticket sales were tremendous in January, February, and March," he added.

If it wasn't for the pandemic, U.S. Ice Dancer and Morgan Hill native, Anthony Ponomarenko would be competing in front of a home crowd in January.

"The cancellation of San Jose was also not surprising," he told ABC7 News. "I think, really just adapting to this new world and what we're experiencing, it's all new. So people have to commit and make sacrifices."

Ponomarenko said it would've been surreal to perform in front of friends and family, especially because he'd be competing for a World Team spot, which is top three.

"We ended up in fourth place last year," he said. "So, we want to improve on that result. San Jose was really important for us, just to make that next step and hopefully work our way towards making the Olympic team."

Ponomarenko said he was recently in Las Vegas, for Skate America- the 2020 Guaranteed Rate Skate America, which is the first event in the reimagined 2020 ISU Grand Prix of Figure Skating series.

"The only difference was the mask-wearing and the cardboard cutouts," he shared. "But besides that, it really felt normal."

"If there are any positives that come from the pandemic, it's preparing your environments for safety," Poch told ABC7 News. "More importantly, for your guests and patrons, staff and participants."

Ponomarenko found that even with all-new safety measures in place for Skate America, motivation among athletes remained.

"During this whole pandemic, I felt very safe competing," he said. "I know that U.S. Figure Skating will do everything in their power to make sure all their athletes are safe."

RELATED: Who gets COVID-19 vaccine first? High-risk groups likely to be priority while children wait

Olympic Gold Medalist and Bay Area native Kristi Yamaguchi said the pandemic has forced many to find innovative ways to keep things as normal as possible for sporting events and athletes across the board.

"They're discovering how nimble and creative they can be," Yamaguchi shared. "And to really be able to continue on in such crazy circumstances to bring the sport, not only for the athletes, but to the fans out there."

She said the announcement didn't surprise her, though she understands the significance behind Bay Area athletes competing here at home.

"We'll have quite a few top skaters representing the United States at the World Championships from the Bay Area," she added. "So, we will miss out on seeing them make this big splash at the U.S. championships. But I think, this year- and I guess even in 2021- we're still being hugely affected and have to play it safe."

Yamaguchi said with the on-going pandemic, it makes sense to take measures that will keep the athletes safe.
"The fans will still have access to watch the performances via TV and streaming," she said. "So they can still be a part of it."

Yamaguchi explained the pandemic has made it tough for figure skating athletes.

"They all got a very late start in training this season because of the shelter-in-place mandates that were happening throughout the spring and even into the summer," she said. "That's usually when the heaviest training is taking place for figure skaters, as they prepare for the season to start in September."

She said beyond the late start, there were likely rattled nerves without athletes knowing what was going to happen, or if there was even going to be any type of competitive season.

Beyond the championships which were set for January 12-17, Poch with SJSA said, "We also would have hosted the U.S. Figure Skating High Performance Development Camp, where they bring the top 250 junior level skaters and they watch the final days of the competition. Then they go to an intense three-day training session, learning what it takes to get to that next level."

He said the tough part is that the next "future elite stars" would've been present to see the championships.

Yamaguchi said, "It's really hard for the junior level skaters- the juvenile through novice level skaters- who really use this as a stepping stone in their competitive career."

"The skating life is not as long as, I suppose, other professional athletes out there," she shared. "You have a very short window where you're at your peak, and you want to take advantage of it."

Still, she said there's plenty of time, and plenty of off-ice training athletes can do.

"It'll be interesting to see in a year or two where the talent is landing and how this is effective," she said. "It's hard to say now, but we'll see in the next year or so."

Yamaguchi added, "Just a little side bit about Anthony Ponomarenko- his parents were actually gold medalists the same year I was, at the Olympics in '92 as dance team!"

"It's totally the next generation happening right now," she added. "It's great. He's an incredible, hardworking and talented skater."

Among the Bay Area athletes many were hoping to catch on the ice at the SAP Center: Alysa Liu, a two-time reigning senior national champion from Richmond, 2018 Olympians Karen Chen of Fremont and Vincent Zhou of Palo Alto, and as mentioned above, ice dancer Anthony Ponomarenko of Morgan Hill.

Take a look at the latest stories and videos about the 2020 election here.