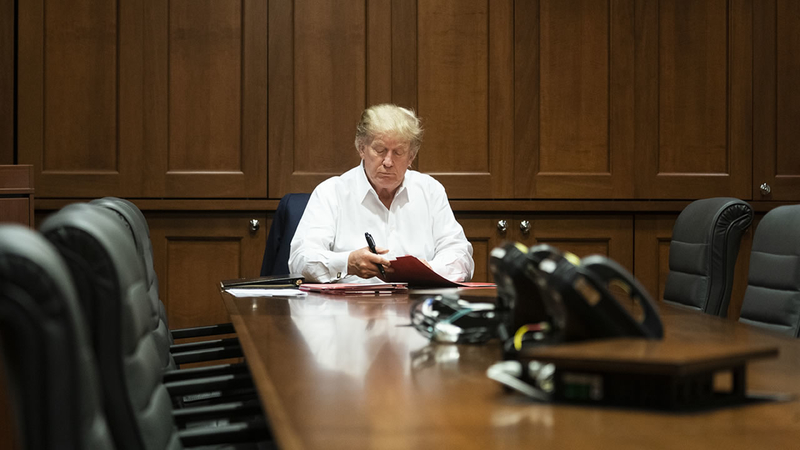 SAN FRANCISCO (KGO) -- President Donald Trump is starting to feel "well" and thanked the public for their support in a video posted on Saturday evening as he remains hospitalized with COVID-19.

Now the next seven to 10 days are vital to see how the president's body responds to the latest treatment.

"We certainly see people that do this and they come up a little bit and the next day they crash. He's got to be watched very carefully. The fact that he was low yesterday means that he is at risk of becoming low again tonight," Dr. Robert Wachter said.

RELATED: President Trump was given oxygen before his admission to hospital: Reports

Dr. Wachter's biggest concern is that President Trump was allegedly given oxygen at the White House, indicating the virus may have affected his lungs.

"Now that his oxygen level is fallen we know that he is at risk of a bad case of COVID-pneumonia," Wachter added. "The key is that his oxygen level was low. Because sometimes some people come to the ER and we slap on a little oxygen and it's not a big deal. But knowing that he did get it because he actually needed it is very important."

A diagnosis that according to UC Hastings Law Professor Hadar Aviram could potentially change the presidential race.

WATCH: Trump says 'I feel much better,' but doctor says he's 'not yet out of the woods' amid COVID-19
EMBED More News Videos

The president's doctor say he is not out of the wood yet with COVID-19 but the team remains cautiously optimistic.

"This could play either to his determent with people who would be accusing him of downplaying the pandemic and then sort of learning from his own mistakes or he could ride on a wave of sympathy from behind and recover the problems from his current campaign," said Professor Aviram.

A month from the election there is a question that lingers, "If the 25th amendment is invoked who would be on the ballot?"

"The constitution did not foresee quite this situation, but what might happen is that Mike Pence would take over the presidential duties temporarily while Trump remains on the ballot," explained Professor Aviram.

President Trump is 74 years old and is clinically overweight. Two factors that place him under the high risk category for recovery.

"He is not out of the woods and if you take all people of his age and in his situation at this point in the progression you would have to say there is a chance of passing away from this is at least 10%, Now it's not 50% his odds are still with him that he is going to do okay," said Dr. Wachter.

In the past Dr. Wachter has been critical of the president handling of the pandemic, but says that's not influencing his medical opinion.

Dr. Wachter also suggested for the upcoming presidential debate to be "virtual," pointing to the possibility that President Trump may be contagious in 14 days.

"It wouldn't be unreasonable for him to debate...14 or 15 days after the onset infection I would still worry about the possibility that he is still infectious. Although in general about 10 to12 days after the symptoms you're no longer infectious"
Report a correction or typo
Related topics:
politicssan franciscodonald trumpcoronavirusucsfpresident donald trumpcovid 19
Copyright © 2022 KGO-TV. All Rights Reserved.
TOP STORIES
Bay Area's great migration is creating a 'Megaregion'
Sonoma resident says Airbnb visitors stole his cat
Couple devastated after stolen van found severely damaged in Oakland
EDD director resigns after just over 1 year in charge
Meet the man taking 49ers superfan to a whole new level
'We're taking the town over!': 49ers fans arrive in LA for NFC
49ers-Rams NFC Championship Game preview
Show More
How many times can I reuse my N95 mask?
Fraudulent rent relief claims divert funds from those in need
Anti-racist lawn libraries take hold in Bay Area neighborhoods
Some Bay Area counties begin easing COVID restrictions
10 injured in PA bridge collapse; human chain formed to help
More TOP STORIES News