Is this the future of schools? Kids learn to administer their own COVID-19 test 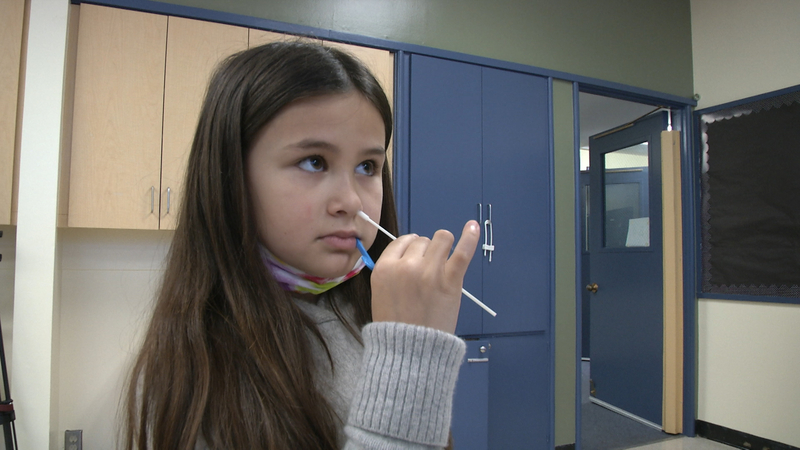 SAN FRANCISCO (KGO) -- Besides learning about science and art, kids at a San Francisco summer camp got an even bigger lesson this week about the coronavirus.

It began with an unusual request - "You see this part, the fuzzy part? That is going to go in your nose."

That is just one of the instructions UCSF researchers gave the kids at Celsius and Beyond summer camp.

They spent the day with the group not just testing kids but also the staff and parents.

RELATED: Summer camps start up in Bay Area, could be trial run for fall school openings

Researchers picked Celsius and Beyond because it is one of the few summer camps in the Bay Area that is holding in-person sessions indoors.

"We are testing at the beginning of camp and we'll test again at the end of camp to see if there were any infections of COVID while kids were in a school type environment," said Dr. Naomi Bardach, an associate professor of pediatrics at UCSF who is leading the study.

The test being administered is not the same test being done at hospitals that requires a swab to be inserted deep into the nose.

Instead, kids are in control of this test. The first thing they have to do is clean their mouth by inserting an object similar to a toothbrush into their mouth.

After rubbing the top and bottom of the inside of both cheeks, the kids keep the object in their mouth for two minutes. They also have to rub a swab along the inside of their nose just inside the nostril.

"Being able to show that we can do it here and the kids are really able to do it on their own in a way that is pretty safe for them and very comfortable, it means that we can do it in a school setting," said Dr. Bardach.

The test did not seem to bother the campers.

"It is just sort of swabbing your mouth a little bit, poking around. It's a little bit like brushing your teeth," said camper Avi Katzman.

"I was thinking it was a shot, but it's better. It didn't hurt at all," said Oren.

Analyzing the spread of the coronavirus is just one goal of the study. The other is showing how easily this self-test can be administered without the need to hire medical staff to conduct testing. Schools can instead rely on its current staff.

"It allows the person collecting the specimen to stay at least six feet away so that the person themselves doesn't have to have the gown, N95s, face shields, which is what we need when the test collector has to actually get the specimen," said Dr. Bardach.

Testing is being done during the second day of this three-week camp. The researchers will be back near the end of the summer camp to conduct another test and determine if there was any spread among the kids.