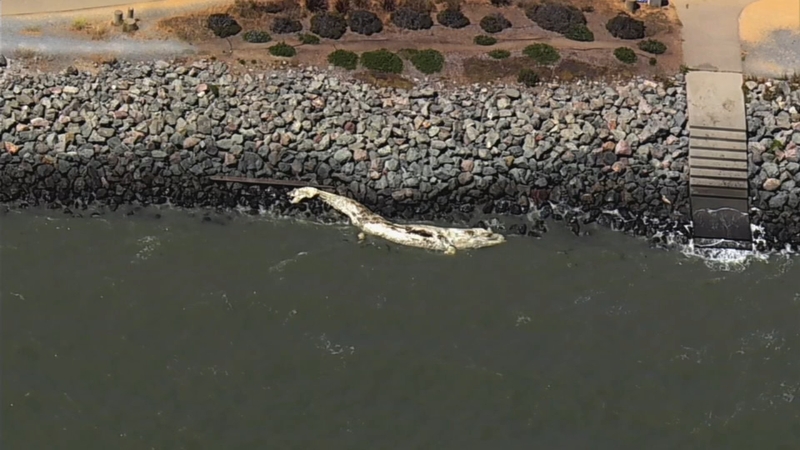 This whale has been floating around SF Bay for 1 month

RICHMOND, Calif. (KGO) -- A massive gray whale carcass that washed ashore in Richmond Thursday is no stranger to the region. The carcass has been floating around the San Francisco Bay for a month.

The Marine Mammal Center first became aware of the gray whale on May 26 when it washed into an inaccessible cove in Marin County near Tennessee Valley Beach. It was already in a "very decomposed body condition" at that point, says the research group.

They were able to collect some tissue samples but weren't able to perform a necropsy to determine cause of death.

The tide eventually washed the whale out of the cove. It floated until it hit shore again, near the Richmond marina.

"When we came across it, it just stopped us in our tracks," said Marcita Enis, who passed by the whale during on walk along the shoreline.

The whale's decomposing body is camouflaged along the rocky shoreline in Richmond.

"We couldn't see it, but we definitely smelled it," exclaimed Karen Buchanan, who lives in the neighborhood.

The gray whale is hardly the first to appear in the Bay Area this year. So far, there have been 14 reported dead gray whales, one pygmy sperm whale and two fin whales.

"It's kinda sad," said Jameice Richardson, who heard about the whale and wanted to see it for herself. "I've never seen a whale close-up even though it's not alive, but I wanted to come see it and maybe see if I could figure out what happened to it."

An Unusual Mortality Event, that's what NOAA Fisheries is calling the increased number of grey whales that have washed up on the West Coast since 2019.

The Marine Mammal Center has not performed a necropsy on the whale in Richmond. But in other recent whales they've examined, they say malnutrition, entanglement, and trauma from ship strikes are the most common causes of death.

"To see a wild creature like that, it does take us out of ourselves and realize that it's just not human beings, nature is here, and humans beings really should not dominate and take over all the wild spaces," said Richmond resident, Naki Margolis, while looking at the whale.

"They're hoping that the whale will wash back out to the bay," said John Gioia, a Contra Costa County Supervisor, who also lives near the whale.

RELATED:Another whale found dead at Bay Area beach; 4th in over a week

He says because the whale is already decomposing, NOAA and the Marine Mammal Center do not think towing the whale away from the shore is an option. "They believe that the best thing is for the whale to decompose naturally which that process can take up to 30 days."

Which is not necessarily what neighbors want to see or smell...

"It's obviously very concerning because it stinks and we spend a lot of time in the water here. We windsurf, we swim, we standup paddle with our kids, so I don't actually know if this is going to be falling into pieces and drifting around," said Veljko Milanovic, who was windsurfing near the whale Friday night.

For now, Gioia says the city of Richmond will tape off the area around the whale to keep people safe.

The Marine Mammal Center asks the public to report any whales that are dead or in distress to 415-289-7325.