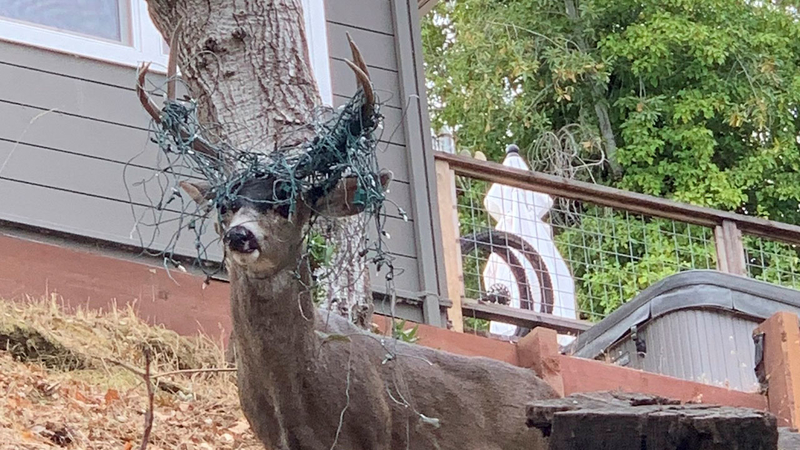 NOVATO, Calif. (KGO) -- Is there anything left that isn't potentially dangerous, anymore? How about exterior holiday lights? So bright. So cheerful. So celebratory.

She wasn't speaking of the light, but in one case, they're most unusual effect-- a male deer seen roaming Marin County with his antlers entangled in Christmas lights. His name is not Rudolph, and at Marin Humane, they're neither surprised nor amused.

"We find wildlife entangled with objects regularly. Deer antlers we can depend on each year," said Cindy Machado, the Director of Animal Services.

The deer in Marin County are a common sight in neighborhoods where they take shelter and often feed in people's yards. Lights are part of the territory.

The buck had been roaming near Camino de Herrera on the San Anselmo-Fairfax border, where residents have gotten to know him and others.

"We have the same four the last three years. They stick together," said Carl Groff, who lives nearby.

Residents find the photos of this entangled buck to be disturbing.

"I think they didn't secure their lights well. It's dangerous. We're in their land," opined Jill Pennington.

Marin Humane first learned about this entangled buck last week. As dangerous as it looks, they say he's probably more annoyed by the lights than in pain.

As antler entanglements go, they have seen much worse.

"We had a deer with a lawn chair wrapped around its head with a hammock net and other pieces of garbage," said Machado.