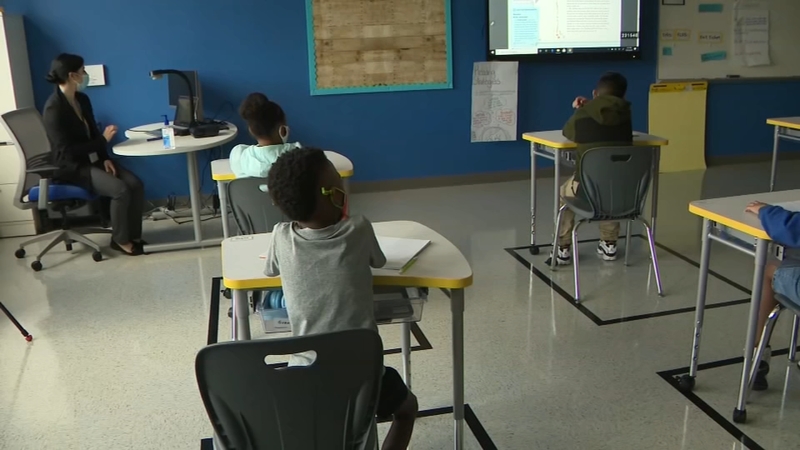 RICHMOND, Calif. (KGO) -- With the spread of the Delta variant, there has been a surge of parents asking that their children be enrolled in a remote independent study program.

It's not what you would call online learning like we knew it -- that no longer exists -- per the California legislature.

The jury is still out on the effects of online learning.

"I can't do it personally, so coming back to school, I'm not the only one who can't do online," expressed Marcus Gerry a student at De Anza High School in Richmond.

"Because I had my own schedule, made my own schedule, and it was easier for me to focus and block out noises and stuff," explained Tyriq Reed, also a De Anza student, who didn't mind online learning.

For more than a year, distance learning became part of our vernacular, but on June 30 of this year it expired. California lawmakers would no longer fund it as counties began to safely reopen.

"We're not spiking the ball, but today is a day to celebrate, a day to reconnect," said Governor Gavin Newsom back in June.

A Stanford doctor says it is "inevitable" that children will get coronavirus in school, and predicts when we are likely to see that happen.

Districts were then told they had to offer an independent study plan for those who had no other option than to continue with remote learning.

"Just under 200 throughout the whole system, a very small amount considering the 13,000 students that we work with," revealed Dublin Unified Superintendent Chris Funk.

"Right now we can take up to 75, but really it will be based on any enrollment numbers," added Superintendent Chris Hurst of West Contra Costa Unified.

RELATED: Gov. Newsom announces all CA teachers must be vaccinated or tested weekly

Independent study has been an option in California for decades for a small number of students.

"It's been seen kind of as this tool to push students who aren't performing academically very highly, or have behavioral problems out of the school system, because it does have a really low level of oversight," explained Johnson.

San Francisco Unified will offer it only to those students who are medically fragile. Basically, they are following the language found in Senate Bill 130, which "authorizes independent study for a pupil whose health would be put at risk by in-person instruction."

The difference, this time, is that school districts have to make their independent study programs better, with more oversight.

VIDEO: How masks impact the spread of the COVID-19 Delta variant in a classroom
EMBED More News Videos

As 56 million school children return to the classroom, the debate over masks in school rages -- along with the Delta variant.

When we asked Oakland Unified School Board member Mike Hutchinson about the program, he said, "No, we're not ready."

Some school districts have chosen to use outside vendors to administer their remote independent study.

But districts like Oakland have another issue. According to Hutchinson, those who sign up for independent study could lose their school assignment.

"We have students who have compromised immune systems. We have a lot of students who cannot get vaccinated, it's not available to them. The only safe thing for those students is to have a different option," added Hutchinson. He's now introduced a resolution that would guarantee their school assignment once they can safely turn to in-person learning.

A group of parent protested in front of San Francisco Unified Headquarters, arguing that despite the limitations of independent study, they should have the right to choose. Many of their kids are not necessarily medically fragile, but just don't feel comfortable being in school with the Delta variant spreading.

And because the health information is always evolving, many minority groups who don't speak the language are sometimes, ill-informed.

Gloria Corral of the Parent Institute for Quality Education says districts have to do better at convincing parents that schools are safe.

"In order for families to make those informed decisions, they do have to have the appropriate information about protocols, about access, about drop off, pick up and logistics," advised Corral.

Hutchinson says school districts are here to serve families and their children.

"I need the community to make demands from our leadership and hold us all accountable," concluded Hutchinson.