Feds still looking for Alcatraz fugitives, 3 men in their 90s 'if they're still alive' 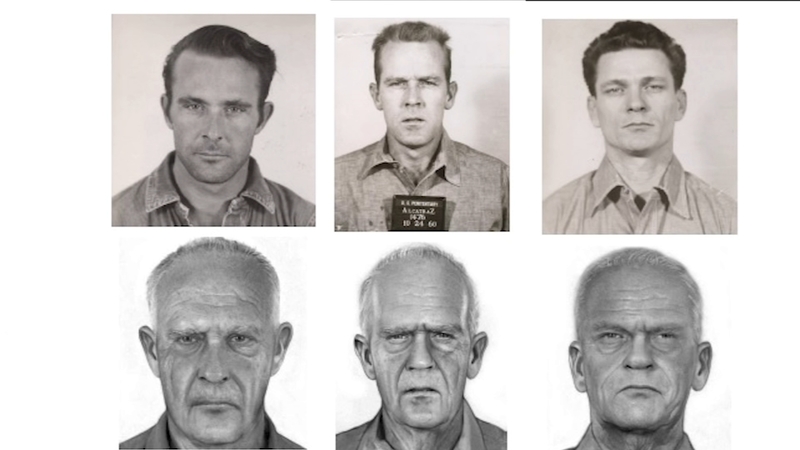 SAN FRANCISCO (KGO) -- A possible clue into one of the greatest mysteries of the 20th century. The U.S. Marshals Service released updated renderings of what three missing Alcatraz fugitives would look like in their 80s with hopes to put them back behind bars. That's if they're still alive. If the men are still alive they would be in their 90s today.

The federal agency has been investigating the case for more than four decades after the FBI turned it over following an unsuccessful 17-year probe.

Stephanie: "The U.S. Marshals Service has been investigating for 41 years... so why release these updated renderings now?"
Abel Pena: "I think it's interesting that they would release them today...it's rare in the sense that they've come this late, but it's better late than never."

Pena is a former FBI agent who served for nearly 30 years leading a squad that specialized in finding fugitives. He says releasing these renderings signals there is a potentially credible tip that at least one of the convicts is still alive.

Could a deathbed confession solve the mystery of three bank robbers' escape from Alcatraz in 1962?

"It's a possibility that maybe there's some witnesses that have called in... individuals that appear like these folks...maybe these renderings can confirm or deny that and be used as a comparison," said Pena.

The three men in question are convicted bank robber Frank Morris, John Anglin and his brother Clarence Anglin. On June 11, 1962 the trio successfully escaped the maximum security prison after posing fake heads in their beds that were pushed through holes of a concrete wall. The fugitives made inflated vests and a raft from prison raincoats.

"All the work they did...that's months of labor without being caught," said Deputy U.S. Marshal Michael Dyke.

The ABC7 News I-Team spoke exclusively with Dyke in 2016 when he was tasked to track down the convicted trio - all of whom knew each other from previous stints in prison.

"They were able to do what no one else has done which is to get completely off the island and never be found - if they lived," Dyke said.

The FBI and U.S. Marshals Service investigated many tips over the years, including the discovery of a raft and paddle possible recovered from Angel Island, a car stolen by three men in Marin County the night of the escape, and a photo taken of the Anglin brothers in 1975 by a childhood friend who claimed the brothers were alive and last seen at a bar in Brazil. An analyst hired by the Anglin family confirmed the photograph's legitimacy, but the FBI did not.

The occupation brought new life, tragic death, and a struggle for power. And in the end, it started a national debate on Native American rights that inspired generations and forever changed public opinion and changed public policy.

Many people assumed the trio died by drowning in the Bay. But to date, no bodies have ever been found.

"If somebody recognizes one or even both of those brothers... let's hope they call in and the U.S. Marshals will be able to get their guys," Pena said.

ABC7 reached out to the U.S. Marshals Service for further comment on the release of these renderings, but have yet to hear back. The message the federal agency has given to the press so far has served as a "warning to fugitives" that despite the amount of time passed, this search won't stop. Even if these fugitives are in their 90s.