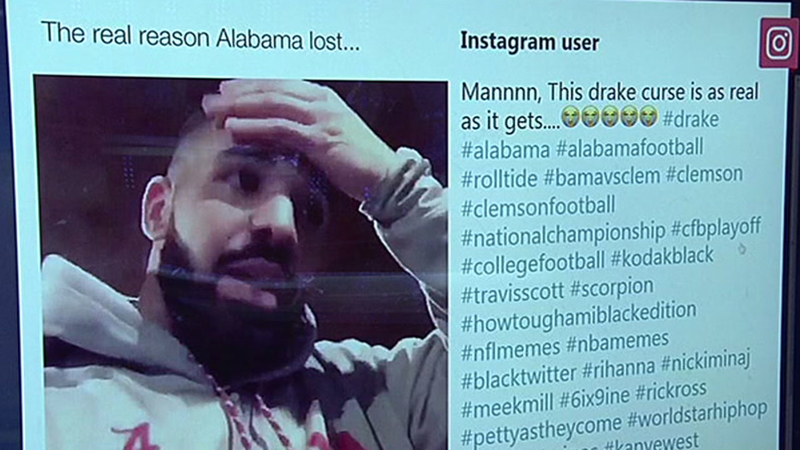 SANTA CLARA, California -- Is there such thing as a "Drake curse?"

After the new year, Drake posted a video wearing an Alabama sweatshirt talking about resolutions.

"All that resolution stuff is great. All that mental talk to yourself is great. But what you got to do on the 1st, you got to get up and actually do it," Drake said in the video at the gym.

The Alabama football Twitter account shared the video with the caption, "Get your mind right! Motivation from Drake repping Bama!"

Get your mind right!
Motivation from - @Drake repping Bama!#OutworkYesterday#RollTide pic.twitter.com/Pv0nK6JEjt

Alabama fans were quick to comment about the video, saying that they didn't want his endorsement because he's "bad luck."

Even ESPN got in on the fun, sharing photos of Drake wearing sweatshirts of different teams.

"Will Alabama fall victim to the Drake curse?" the tweet read on Jan. 3

Will Alabama fall victim to the Drake Curse? pic.twitter.com/WiV6tuggEE

Sure enough, Alabama lost. But they didn't just lose, they got toppled by Clemson 44-16.

So the Drake curse gotta be real. Alabama really went out like that.

Drake has been spotted wearing Houston team jerseys in the past. When he was in Houston for his concert, he wore a UH football jersey on stage.

#TBT to the last time @Drake was at Toyota Center!

We're not saying this curse is legit, but the Coogs did lose big time against Army in the Lockheed Martin Armed Forces Bowl game 70-14.

Drake, could you kindly pick a non-Houston team jersey to wear in the future, please? Sincerely, Houston.