For 1st time ever, you can buy crab straight from the boats on SF's Fisherman's Wharf 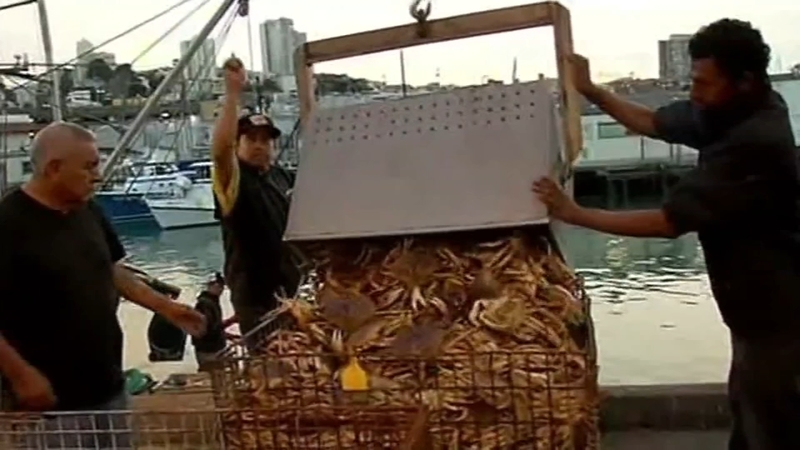 Crab season was supposed to start on November 15, but was put on hold due to migrating whales and sea turtles.

Now that it's finally underway, you may notice that for the first time people are allowed to buy crabs right off the boats in San Francisco.

The one-year program was approved by the Port Commission last month and authorizes "off-the boat" crab sales between consumers and permitted fishers.

Under the permit, all fish and crab must be sold whole and uncooked, in accordance with all health code regulations. Additionally, all sales must occur from the vessel and no selling stations will be allowed to be set up along the wharf or anywhere else.

So far, five fishers have received permits for the program.

"The kickoff of San Francisco's commercial crab season is a highlight for so many of us, especially with it coming just in time for New Year's Eve," San Francisco Mayor London Breed said in a statement. "This new program will support our family-run businesses and provide the incredible experience of being able to buy directly off the boats from the fishermen who are out there on the water. We hope buying direct from the boat will be the start of a new tradition for residents and visitors, and yet another reason to come on down to Fisherman's Wharf and celebrate San Francisco."

Officials are still trying to determine the cause of a massive fire that engulfed Pier 45 at San Francisco's famed Fisherman's Wharf. ABC7's DRONEVIEW7 was over the site on March 17 and again weeks later as investigators sifted through the debris.

Crab Boat Owners Association President John Barnett said, "This will be the first season in San Francisco that the public can actually buy live crabs from the fishermen off the boat. Good for the consumer, the fishermen, and the environment."

The program is part of an effort to support local fishers, who have been hit with delayed seasons over recent years due to both COVID-19 and wildlife protection initiatives. Additionally, back in May 2020, a disastrous fire along the waterfront resulted in more than 30 fishermen losing some 8,000 crab, shrimp and black cod traps and pots.

Pier 45, located at Fisherman's Wharf, has long been regarded as the heart of the city's crab and fishing industry, housing the largest concentration of commercial fish processors and distributors on the West Coast.