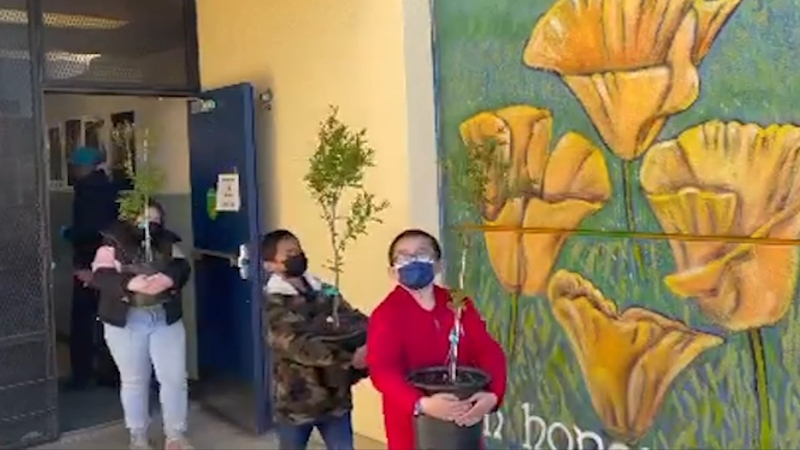 EAST OAKLAND, Calif. (KGO) -- Third and 4th Graders in East Oakland are making the news for their hard work in the community as we approach Earth Day, which is Friday April 22.

A group of kids from Korematsu Discovery Academy in Oakland said they wanted to better their neighborhood. You may remember their school was closed last year for a couple days after a flea infestation. That problem was solved and now the kids are on the move.

They may barely be bigger than the trees their holding but several third and fourth graders at the school have referred to themselves as a tree army, doing their part for Earth Day.

RELATED: New Nat Geo show is the perfect thing to watch with your family this Earth Day

"We went around the neighborhood of the school going door to door asking if they wanted to plant a little fruit tree," said 4th grader Santiago Duenas.

"We went to over 200 doors," said 4th grader Melanie Pacheco.

The project was inspired after the kid's school had to be shutdown last year for two days due to a flea infestation. They learned later that cold weather would have likely killed nearby flea eggs but the cold weather never came.

Two elementary schools in Oakland will be closed for the rest of the week due to an infestation of fleas.

The kids learned about global warming and grew concerned. A month after the fleas, this eagle showed up on their soccer field.

"When your environment gets out of balance strange things start happening like the fleas and the eagle right, so it was really trying to bring balance back through community," said Korematsu teacher Dana Hinchliffe.

Soon afterwards the kids came up with the idea of planting trees. Teachers were able to find a group called Common Vision to donate those trees and the kids went to work. Offering to plant them for neighbors and even giving bird sculptures to families to go with it.

"The thought was to plant trees to help the earth. So there's less global warming, so it's more cold, so it's balanced all good," said Duenas.

"Some people were really nice and they offered us things," said 4th grader Zenaida Romero.

The kids planted 50 trees in neighborhood yards, as those in one out of four homes said yes to a new tree. Students then took the remaining 70 trees home to be planted in their yards.

"It was something the kids will definitely not forget because it wasn't easy, making change is not easy. If everyone had said, 'Yes' they would have thought, 'Oh that's how the world works,' but it's not, so they got a really concentrated version of how difficult it is to make change but how good it is when you succeed," said Hinchliffe.