KGO
By Lyanne Melendez
OAKLAND, Calif. (KGO) -- A strike vote for Oakland teachers is scheduled to begin Tuesday through Friday. This puts teachers one step closer to going out on strike.

More than a week ago, teachers in Oakland had a one-day walk out.

RELATED: Protest at Oakland School Board meeting over budget cuts and school closures

Now that the signs are being collected and a strike authorization vote has been called, teachers could be on the picket lines as early as next month.

Their demands have not changed.

"We're at 12 percent raise with class size reduction across the board and providing more counselors, nurses and psychologist for our students," said Ismael Armendariz of the Oakland Education Association.

That's 12 percent over three years, but the district has offered only a five percent raise over that same period.

Adding to this conflict is the fact that Oakland Unified has a huge structural deficit that continues to be addressed. The school board is considering letting go of staff at the central office and cutting back on school services.

"Any raises beyond what is already there, those will add to the deficit and cause us to have to cut more," explained John Sasaki, spokesperson for the Oakland Unified School District.
The school district has stated that one way to reduce its deficit is to operate fewer schools. Not counting charter schools, there are 86 traditional public schools in Oakland and not enough students.

Already the district is in the process of consolidating two schools and will vote Monday night to close Roots International Academy which has fewer than 200 students.

RELATED: Oakland School Board to vote on recommended budget cuts

Last week, students, parents and teachers showed their opposition to the idea.

The final number and names of schools that will be closed or consolidated are expected to be revealed next month. 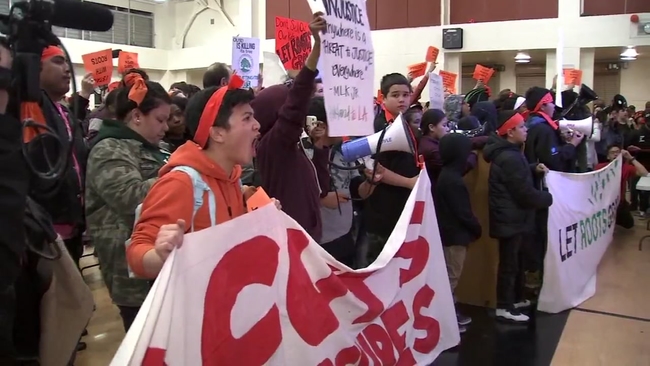