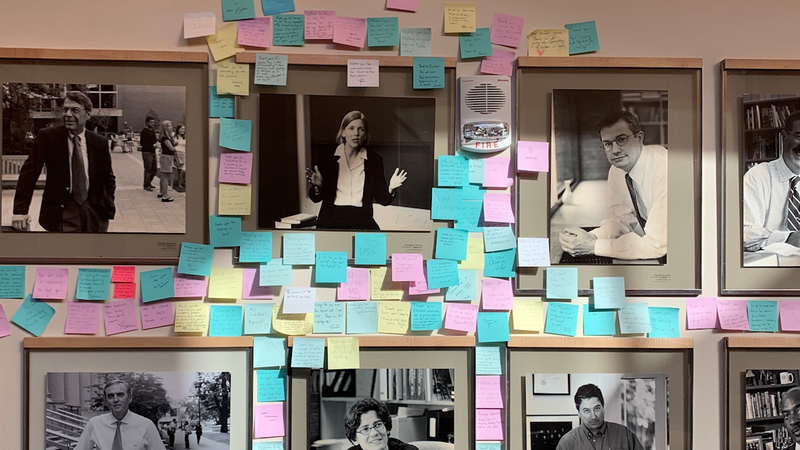 CAMBRIDGE, Mass. -- A wall at Harvard Law School that bears a photo of Elizabeth Warren has turned into a makeshift display of gratitude as supporters blanket the wall with notes thanking the Massachusetts senator for her presidential run.

The wall, according to Harvard law student Jared Odessky, contains photos of the law school's tenured professors over the years. Warren first taught at Harvard in 1992 and was appointed the Leo Gottlieb Professor of Law in 1995.

Odessky took to Twitter Thursday, the day Warren announced she would suspend her campaign, to share a photo of the wall with a smattering of colorful notes with messages to Warren. He followed up later in the day with a second tweet showing how the tribute had spread across the wall.

Harvard Law School displays the photos of all tenured professors, past and present. Here are the thank you notes starting to appear next to the photo of @ewarren pic.twitter.com/JIVlHwY6O4

The notes included messages like "Thank you for caring about details in a world that doesn't," "You are an inspiration," and "We will keep fighting for a better world."

Her supporters reflected on Warren's role as a woman in politics, thanking her for "every crack you make in the glass ceiling" and for "giving voice to smart women." Many of the messages also included riffs on the phrase "Nevertheless, she persisted," which became a rallying cry for women's equality after Senate Majority Leader Mitch McConnell used it in a rebuke of Warren during a 2017 Senate hearing.

Others thanked Warren for putting pressure on former New York City Mayor Mike Bloomberg during two recent debates, calling on him to invalidate non-disclosure agreements involving allegations of workplace misconduct that he has disputed. Bloomberg later offered to release multiple women from those agreements.

Warren was the Democratic presidential primary's last top female candidate. She suspended her campaign Thursday, two days after a disappointing Super Tuesday that included a third-place finish in her home state.

Warren's voice cracked when she talked about meeting so many little girls while campaigning around the country for the past year and knowing they "are going to have to wait four more years," at least, to see a woman in the White House.

She added: "I have no regrets at all. This has been the honor of a lifetime."