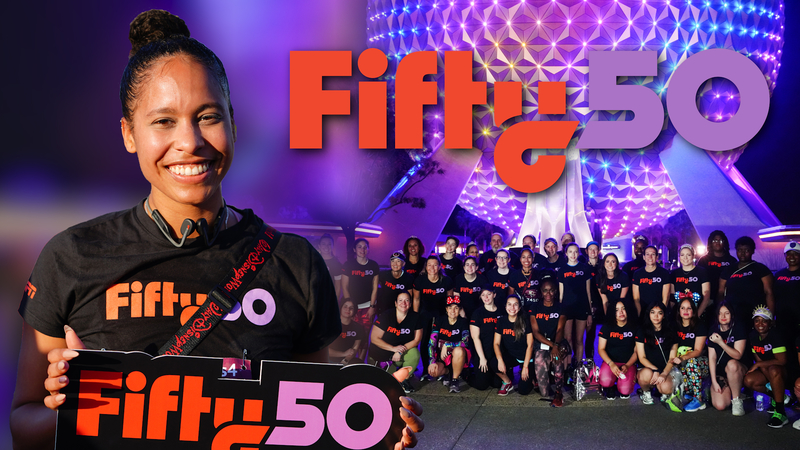 ORLANDO, Florida -- ESPN was represented by 50 runners to unofficially kick off its Fifty/50 initiative at the 2021 Disney Princess Half Marathon Weekend -- part of the Walt Disney World Resort 50th Anniversary celebration on Sunday, Feb. 27.

Each woman had their own story written at the race -- a time for a strong community to come together and celebrate the month-long initiative that so many of these special women have added to their everyday work.

Fifty/50 is ESPN's monumental initiative, in collaboration with The Walt Disney Company, highlighting the civil rights journey of women across the sports and cultural landscape, and commemorates the 50th anniversary of the passing of Title IX.

The initiative commemorates the 50th anniversary of the passing of Title IX, the federal civil rights law that prohibits sex-based discrimination in any educational institution that receives federal funding, and gave women the equal opportunity to play.

"Fifty/50 is a significant initiative for The Walt Disney Company and its affiliates; the breadth of content is a reflection of the progress that has occurred over the last 50 years and how much more is still to be done," said Debra OConnell, president of Networks for Disney Media & Entertainment Distribution. "We are proud of the joint collaboration across our networks to bring to life so many remarkable stories about the women who have broken countless barriers."

Throughout June 2022, the company will present content and experiences that explore stories at the intersection of women, sports, culture, and the fight for equality.

Content highlights include "37 Words," a four-part documentary series chronicling the hard-fought battle of equal rights in education and athletics from award-winning directors Dawn Porter ("John Lewis: Good Trouble") and Nicole Newnham ("Crip Camp"); "Dream On," from award-winning director Kristen Lappas ("Blackfeet Boxing: Not Invisible"), the story of the 1996 United States Women's Olympic basketball team -- the first multi-part 30 for 30 on a woman-centric story; and the Fifty/50 Shorts, five short films presented by W. Studios and Google that examine diverse stories of women in sports, all featuring women directors and producers.

Additionally, ABC Owned Television Stations will present 50 inspiring stories of courageous, women pioneers breaking barriers stemming from the 37-word law that changed the lives of women across the U.S.

Jimmy Pitaro, Chairman, ESPN, and Sports Content, said: "This is an important milestone for Title IX and we wanted to find creative ways to celebrate it across ESPN and The Walt Disney Company. Whether it is our commitment to a rich package of live women's sports highlighting the stories of female athletes across our platforms, the many talented women working in front of the camera, or the diverse teams behind the content we create, our commitment to elevating women in sports is unwavering. Fifty/50 has been an incredible endeavor made possible by so many at the company, and I have no doubt sports fans will appreciate the extraordinary work they have created."