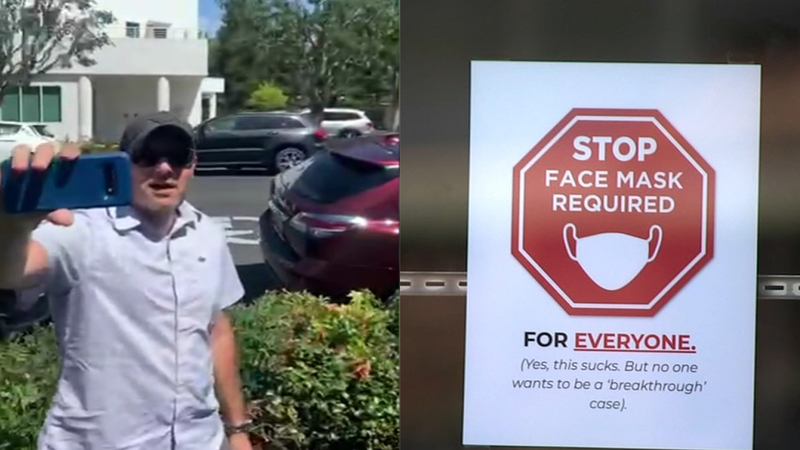 CAMPBELL, Calif. (KGO) -- A group of anti-maskers who have been frequenting South Bay businesses and recording their interactions with staff and customers have been spotted at more locations, prompting some employees to pursue legal action.

ABC7 News has discovered the group may have also violated the law.

One of the owners of Wheel Away cycle shop in Campbell, who only wants to use her first name, Noelle, say they've been targeted three times. Seen on cell phone video: a group of men outside the store and also entering their store without masks despite four clear signs indicating a face covering is required inside. The group later post their encounters on YouTube under the account name Easy Belivsim.

One video a member of the group can be heard saying "Scared boys? If you smile we can't tell" in reference to the employee who is wearing a face covering.

"They wouldn't leave. Refused to leave and I was like I'm going to call the cops for trespassing and I'm not doing this anymore," Noelle said.

Wheel Away bike shop is only one of a number of businesses targeted by this group which refused to provide their names and contact information to ABC7. ABC7 reached out to the group via YouTube on Monday which resulted in one man providing us a statement.

Various bystanders who ask to remain anonymous have captured the group at Recycle Books, the Rose Garden public library, the LEGO store and at the Valley Fair Mall.
They've also visited Legends Comics and Games where general manager Michael Sohn has seen them causing trouble for employees.

"We asked them to put on masks and they refused. They took an item from one of our shelves, threw money hitting one of our employees and took off," he said.

Shoppers and employees at the Century City mall on Sunday became the target of anti-mask protesters who forcefully spread their message to anyone wearing a mask -- which was everyone at the mall because masks are required.

After our initial report on the group Monday, the group appears to be calling businesses and recording the conversations to post on YouTube. One employee at Recycle Books says he had no idea he was being recorded and was taken aback when he saw a video with his voice on it published to the group's YouTube channel. California, being a two-party consent state means phone conversations can not be recorded without both people agreeing. Without the consent, it is a violation of the law.

"There are young kids here we want to try and protect. We're going to take it seriously. I don't want to be a breakthrough case," she said.