The zip codes that donated big to the Trump, Biden campaigns in the Bay Area 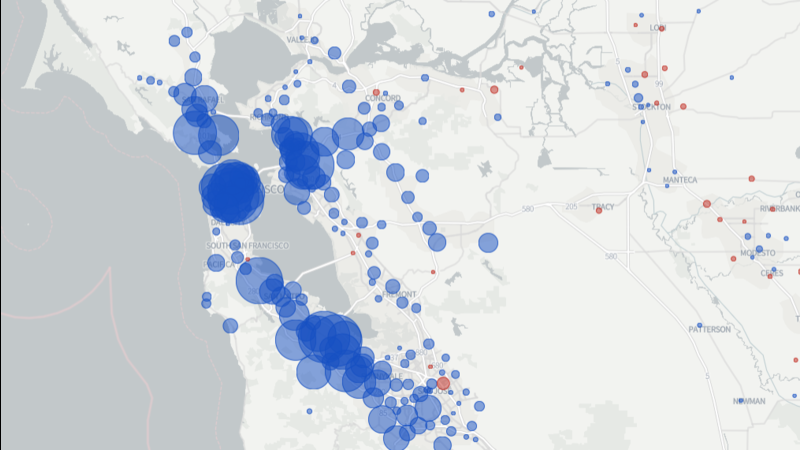 SAN FRANCISCO (KGO) -- A map created by ABC7 News' data team shows which zip codes are doling out the donations in the 2020 presidential campaign in California.

The circles on the map below represent each zip code and are colored by the candidate receiving more contributions in the area. The bigger the circle, the greater advantage the candidate has in that area.

Zoom into the map below to see where the money is coming from around California and how much was donated in your zip code.

When you zoom into the Bay Area, it's no surprise you'll see a lot of big blue bubbles. That being said, there are small pockets of red where President Donald Trump received more campaign contributions than former Vice President Joe Biden.

RELATED: These Bay Area precincts voted for Donald Trump in 2016

For example, in Concord's 94520 zip code, Trump received twice as many contributions compared to Biden. Further east in Contra Costa County near Oakley, Trump had three times more donations than Biden. However, the overall number was still pretty small.

The zip code that donated the most to Trump in the Bay Area is 95116, east of Downtown San Jose. Trump received nearly $47,000 in individual contributions from that area.

The highest concentration of big dollars for Biden is in San Francisco, where nearly every zip code shows a large blue bubble. The zip codes 94110, 94115, 94117 and 94118 each contributed more than $500,000 in individual contributions to the Biden campaign. Those zip codes include some of the wealthiest parts of San Francisco and some of the most densely populated, like the Mission, Bernal Heights, Pacific Heights, Cole Valley, Noe Valley, NoPa and Presidio Heights.

VIDEO: When will we know the winner of the presidential election?
EMBED More News Videos

Other strong areas for Biden donations include the Oakland Hills, where Biden raked in more than $640,000, as well as Mill Valley and Tiburon in Marin County.

A pair of neighboring zip codes are neck and neck when it comes to who donated the most to Biden; donors in just two zip codes of Menlo Park and Palo Alto gave a combined $1.48 million to the Democratic nominee.