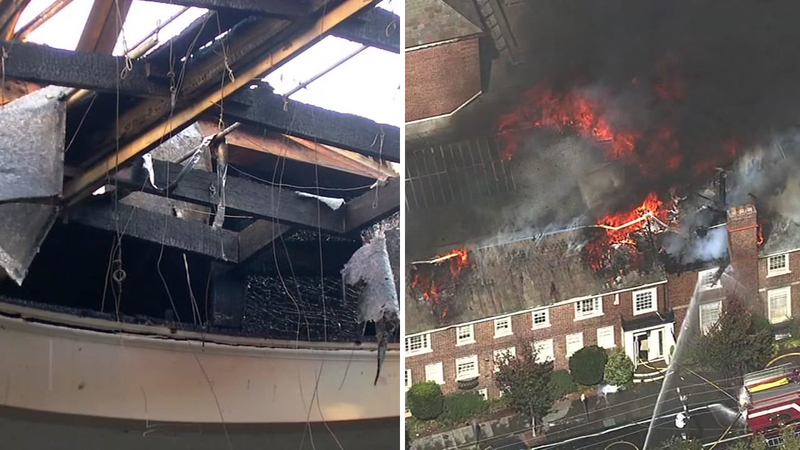 BERKELEY, Calif. (KGO) -- A fire destroyed the First Congregational Church in Berkeley, forcing evacuations just blocks from the University of California, Berkeley campus. The fire is out, but delays are just beginning for drivers in the area.

Flames began pouring out of the church on Channing Way shortly after 1 p.m. Friday.


Nicole Saweres took video just before 1 p.m. as she walked by on her way to class. At that point there were just a few flames coming out from a chimney area.

"It was a chimney fire that started right at the base of the chimney. We were one of the people who called the police," Saweres said.

It started small, but got big quickly, with flames shooting through the roof of the church, going to 4-alarms, within a matter of minutes.

"We don't have any reports of injuries. We do have a firefighter who had to bail out of the building as fire conditions rapidly changed," said Berkeley Fire Chief Gil Dong.

"UC Berkeley is having some of their facilities being affected by the heavy smoke that people are seeing in the area," said Jennifer Coates of the Berkeley Police Department.

Firefighters first tried to combat the flames from the inside, but had to make a quick exit when it was clear the roof was about to collapse. Once the roof went, all firefighters could do was pour water on the gutted structure from the outside.

Classrooms, offices and recreational spaces were destroyed. Firefighters were able to save the sanctuary.

"The firefighters did an excellent job containing it. I'm so grateful to them for their speedy action," said Rev. Molly Baskette of the First Congregational Church of Berkeley. "We have a school on site, a middle school for boys, and everyone was evacuated on time, so praise God. People are much more important than property."

Heavy smoke caused the evacuation of a nearby UC Berkeley dorm. Firefighters say the the Alameda County Sheriff's office heat sensing drone helped save them hours putting out hot spots.

"It was invaluable. We've never had that kind of capability on a fire and it proved itself very, very helpful," said Berkeley assistant fire Chief Dave Brannigan.

Street closures around the fire scene will cause traffic delays for Saturday's homecoming football game at Cal. Police are working on a traffic plan.

There's no word on the fire cause yet, but roofwork was underway to install new solar panels.

Lots of water damage inside areas of church not hit by fire. #Berkeley #abc7now pic.twitter.com/B5xMLduyLn

Inside of First Congregational Church of #Berkeley that caught fire this afternoon. #abc7now pic.twitter.com/3WYO1GFHKE

Dana & Channing Sts in #Berkeley will be shut down tomorrow b/c of fire. Plan accordingly for @Cal #football homecoming game at 3. #abc7now pic.twitter.com/Fl4Jbmd2QJ

.@LauraAnthony7 about to go live with details of fire at First Congressional Church of #Berkeley #abc7now pic.twitter.com/lriPrHZ9go