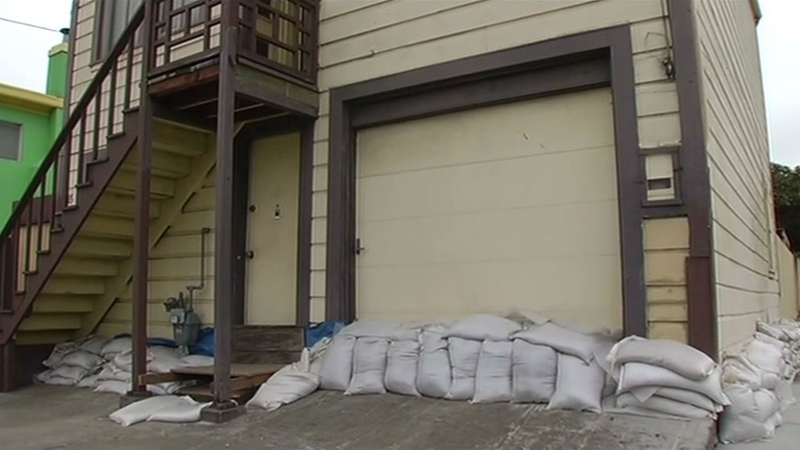 SAN FRANCISCO (KGO) -- Despite the ongoing drought, past rainfall has caused major flooding problems for some of San Francisco neighborhoods. They're so sick and tired of it they've decided to sue the city.

The worst flooding in a Mission Terrace neighborhood occurred in the 2000s as fierce storms rolled the area and caused havoc. Residents sued the city and were awarded $5 mmillion.

Last December, streets of a the same neighborhood flooded. Raw sewage mixed with storm water broke through manhole covers and rushed into homes. Basements, garages and their contents were soaked. Walls and floors were damaged.

Eight months later, sandbags are still integral part of the landscape on many blocks in the area.

Donna Marie Pon Ferrada still gets emotional when she talks about her grandmother who has Alzheimer's disease. The water in her home's basement garage destroyed the furnace.

"She's been using a portable heater because we can't afford to replace the unit that was flooded," said Donna Marie Ponferrada.

Attorney Mark Epstein represents 50 property owners. Many have had their claims denied even though he says Mayor Ed Lee, during a stop here after the floods, promised to make them whole again.

"He understood they needed to replace their personal property and repair their homes and that the claims were going to be paid," Epstein said.

City Public Utilities Commission spokesman Tyrone Jue could not respond to the lawsuit but did say many claims were paid. He said improvements have been made to the system, but that the flooded area has historically been vulnerable to floods.

"There's only a certain amount of capacity that you can have in a sewer pipe, once you exceed that then everything goes to the lowest point," Jue said.

Come this winter, residents are expecting the worst, El Nino and more flooding.