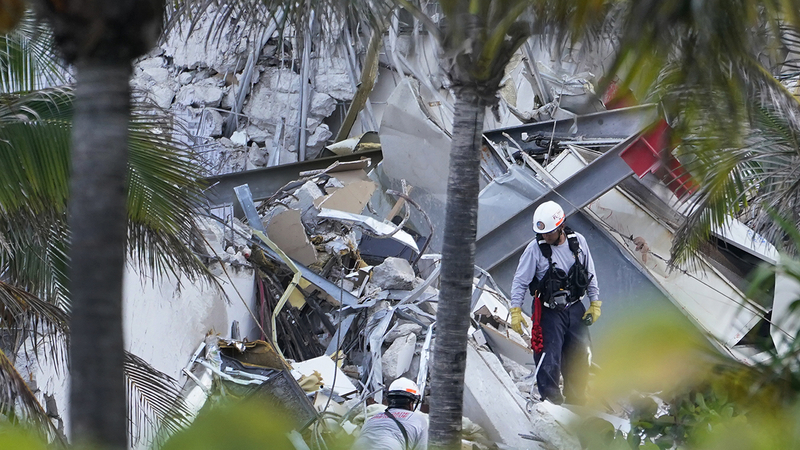 SURFSIDE, Fla. -- As time passes, a top expert in emergency response says hope for finding survivors beneath the mountain of debris from Thursday's condo collapse in Florida is shrinking.

"There's less and less hope as the hours go by, [rescue crews] are holding out saying that there's no hope," said Tom Van Essen, a former New York City Fire Department commissioner who was in charge when the World Trade Center buildings collapsed from the Sept. 11th terrorist attacks in 2001.

One hundred fifty-nine people remain unaccounted for since the wing of an oceanfront residential building near Miami collapsed in the middle of the night. At least four were killed.

SEE ALSO: What we know about those missing in the Miami-area condo collapse
EMBED More News Videos

Loved ones share stories of some of the people who remain missing at the site of the seaside Florida condo.

On Saturday, a crane could be seen removing pieces of rubble from a more than 30-foot pile of debris at the collapse site. Scores of rescuers used big machines, small buckets, drones, microphones and their own hands to pick through the mountain of debris that had been the 12-story Champlain Towers South.

Van Essen said he imagines emergency responders were reluctant to use a crane, which would trigger vibrations and therefore make searching for people more difficult. But he believes the crane was brought on the scene because of a "very deep fire" that officials are having trouble locating.

"Everything they do to compensate for one problem is a greater problem in another area," Van Essen said.

Smoke has been the biggest barrier in expediting rescue efforts, Miami-Dade Mayor Daniella Levine Cava said during a news conference. Van Essen added that the weight and density of debris, rain and the race against time were other factors to consider.

"You just hope that there is somebody under there and they're hanging on, but as the hours go by, it becomes less and less possible," he said.

In a structural field service report from 2018, engineers pointed out the evidence of flooding, cracking and corrosion in the building.

The FDNY and other units searched for weeks amid the piles of rubble at Ground Zero, he said, but the last survivor was pulled from debris 27 hours later.

"There was no hope [in 2001], but we just didn't want to believe that. I think there has been hope [in Florida] over the last couple of days. As time goes by, you become more skeptical that you will find someone," he said. "But these guys are doing a great job."

Michael J. Fagel, an emergency planner who assisted in rescue and recovery efforts during 9/11 and the 1995 Oklahoma City bombing, told ABC News he wants people to be optimistic.