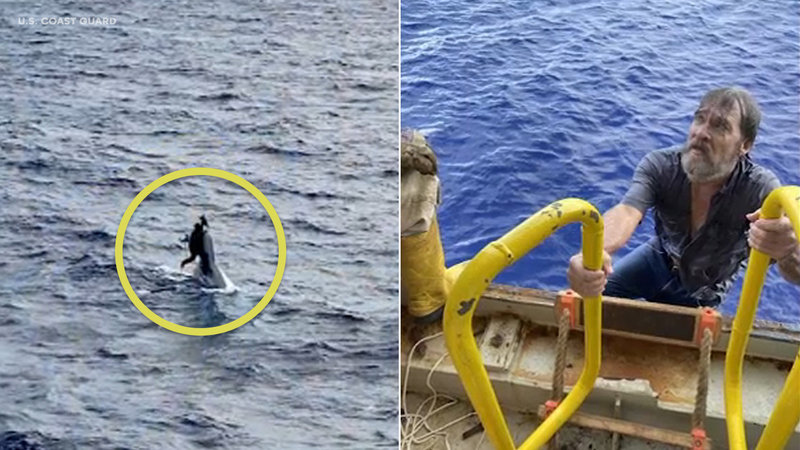 WILMINGTON, Delaware -- A rescued boater who went missing off the east coast of Florida was thankful to be standing on solid ground.

"Thank you for reminding me. Yes, I'm on solid ground," said Stuart Bee, 62, who shared his story of survival after docking in Wilmington, Delaware on Tuesday.

The crew on a Chiquita banana container ship saved his life. The crew found him on Sunday, clinging to his capsized boat about 86 miles from shore.

"We just rescued one person from a capsizing boat at sea," said a crewmember of the container ship named Angeles.

Bee had departed Cape Marina in Port Canaveral around 4 p.m. Friday on his 32-foot boat, according to the Coast Guard. He was reported missing Saturday by a member at the marina who said Bee typically doesn't stay out overnight on his boat, the Coast Guard said.

"I was out there star gazing. It was beautiful and I fell asleep and the water came gushing in," said Bee.

Bee said he swam through his sinking ship to find emergency equipment, but couldn't reach it. For hours he clung to the bow hoping to be found.

"For a minute there I was thinking, 'This is very bad. There's no one around,'" he said.

Then, in the distance, he saw another boat.

"I started to wave at them and they got closer and closer and finally responded. That's it. it's over," he told the Coast Guard after being rescued.

The ship was transporting bananas from Honduras. The crew pulled Bee in with a throw ring.

"It was better than a cruise ship," he said.

Bee chose to stay on board through the trip to Delaware.

"It went from a major concern to suddenly a feeling of relief. Calmness, relief, this is over," he said.