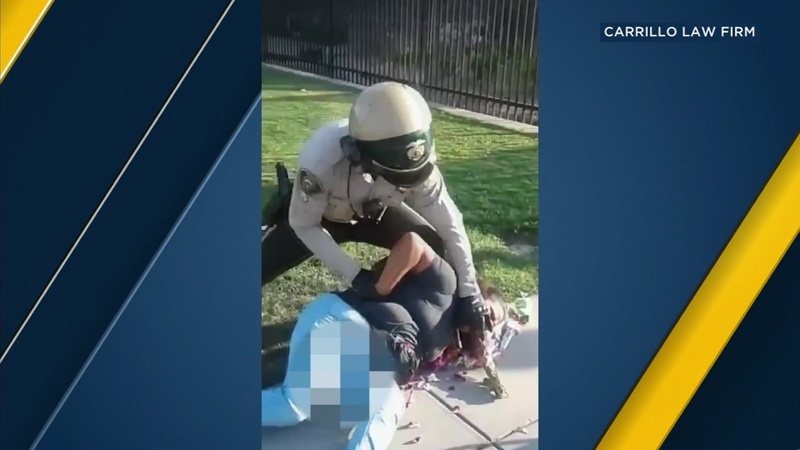 SOUTH PASADENA, Calif. -- Joaquina Valencia breaks down as she asks for justice for what happened to her in June of last year.

She was outside Perris High School selling flowers and Hawaiian leis at the school's graduation.

According to her attorneys, two Riverside County Sheriff's deputies confronted her, asking for her papers.

RELATED: Sister of man who died after being tased by deputies in Millbrae says video discredits official story

One of her attorneys, Ralph Rios, said video capturing the moment shows a deputy grab her left arm and start pulling on it.

"She has the flowers in her hand and that's when the action takes place. She's grabbed by the hair, pulled down and body slammed to the sidewalk," Rios said.

Valencia is now suing the department for excessive force and unlawful detention.

RELATED: Family of man who died after struggle with Anaheim police wants answers

The Riverside County Sheriff's Department wouldn't comment on the lawsuit, however, a spokesperson said at the time of Valencia's arrest, officers contacted and cited about 15 people for vending without a permit.

The last vendor contacted was Valencia. The department's statement goes on to say while the other vendors cooperated with officers, Valencia -- after giving officers a number of fake names -- was arrested and booked for resisting arrest.
Valencia's other attorney, Luis Carrillo, said the officer assumed that she was undocumented and right away asked her for her papers and preceded to use excessive force.

Carrillo said in that process, he damaged her arm.

The Riverside County Sheriff's Department statement goes on to say the video of her arrest released on social media did not capture the other vendors cooperating with the citation process.

The charges of resisting arrest and giving officers false information were later dismissed.