4 killed in crash on 10 Fwy being investigated as DUI 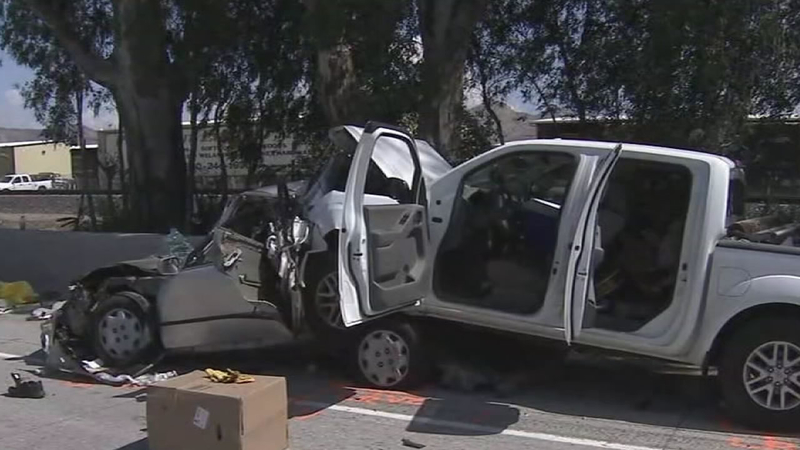 FONTANA, Calif. -- Two adults and two children died in a traffic collision on the 10 Freeway in Fontana Friday that authorities say may have been caused by a drunk driver.

The fatal crash involving three vehicles took place on the eastbound side of the freeway east of Cherry Avenue.

According to the California Highway Patrol, a Honda containing a woman, her two children and her mother had pulled over to the side of the road with an overheated engine around 12:30 p.m. A second vehicle, a dark-colored pickup, had pulled over in front of the Honda to try to help them.

The mother and grandmother were standing in front of the car with the good Samaritan. As they were looking over the vehicle, a white Nissan truck slammed into the two vehicles on the shoulder, crashing so hard that the impact crumpled the entire rear section of the Honda, where the two children were seated.

The impact also sent the dark pickup hurtling across to the other side of the freeway.

"The impact was so severe ... the back seat is pushed into the front seat so bad we can't see anything until they pull the vehicles apart," said CHP Officer Jesus Garcia

Two children and the adult female passenger in the Honda were killed.

The female driver survived with serious injuries and was transported to a local hospital.

She is the mother of the two children who were killed, officials said.

The driver of the white Nissan truck, who was believed to have been intoxicated, survived the crash and was transported to the same hospital. Officials said they found open cans of beer in the Nissan. Officers remained with the suspect at the hospital.

The fourth person killed was the good Samaritan in the dark-colored pickup who had pulled over and was attempting to assist the woman and children with their car trouble.

The CHP later identified the victims and suspect:

The passenger in the Honda who died was Maria Rodriguez, 58, of La Puente. She is the mother of the driver of the Honda, Maria Briseno, who survived and was hospitalized.

Step-siblings Isaac Briseno and Ailyn Miguel, both 12 years old, were the children killed in the back seat of the car.

The name of the good Samaritan in the other pickup has not been released, but he is a 60-year-old man from Rialto.

The suspect in the white Nissan was identified as Luis Sanchez, 64, of Riverside. He was being held pending toxicology tests. Authorities said Sanchez refused to speak with them.

Before the overheated vehicle was struck, Maria Briseno called her husband and told him about the vehicle's problem, officials said.

When her husband arrived, he came upon the fatal crash scene, according to the CHP.

Investigators say they found open cans of beer in a vehicle involved in a collision that killed four people on the 10 Freeway in Fontana.