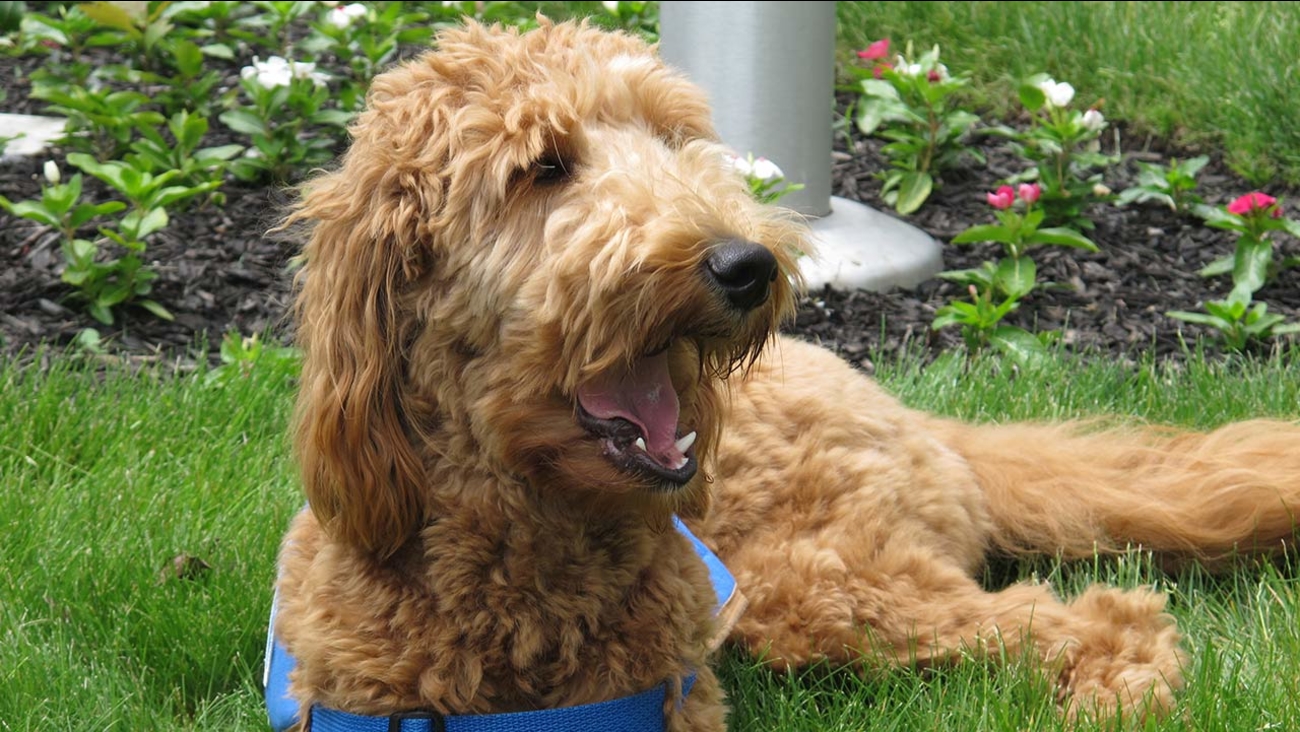 Lulu, a goldendoodle who works as a therapy dog, lolls on the lawn outside the Ballard-Durand funeral home in White Plains, N.Y., on Thursday, June 4, 2015 (AP Photo/Jim Fitzgerald)

WHITE PLAINS, NY -- Sandy Del Duca was mourning the death of her father when Lulu, a curly haired goldendoodle, came bounding down the stairs at the Ballard-Durand funeral home.

Del Duca thought Lulu was simply the pet of funeral home owner Matthew Fiorillo, who she was meeting to make arrangements. But the dog also works there - one of an increasing number of dogs being offered by American funeral homes to comfort mourners.

It didn't take long for Del Duca to be won over.

"That dog looked into my eyes and I was done," Del Duca said. "She seemed to know just what I needed. A funeral is a funeral, it's not a great thing. But that dog gave the service a family atmosphere and made it more of a celebration."

Whenever a dog joins a group of mourners, "the atmosphere changes," said Mark Krause, owner and president of Krause Funeral Home and Cremation Service in Milwaukee. "In a funeral home, people are typically on edge, uncomfortable. But everyone lights up, everyone has to greet the dog."

Krause bought Oliver, a Portuguese water dog, in 2001 to be a family pet. But his wife had Oliver trained to be a therapy dog and he made the usual therapy-dog visits: schools, nursing homes, hospitals.

"Then my wife said, 'Why can't he do this in the funeral home?' and in the 10-plus years we had him, he probably touched a couple thousand families," Krause said. Oliver seemed to "sense grief and who needed him."

In one case, a boy about 7 years old had lost his 3-year-old sister and had stopped talking, even to his parents.

"The minute the dog came in, the boy started talking to him about his sister," Krause said. "This little boy tells the dog, 'I don't know why everyone's so upset, my sister said she's fine where she is.'"

"I don't suppose Oliver understood, but he looked at the boy as if he did," Krause added.

Oliver died in 2011 - his funeral was attended by 150 people and many of their pets - and has been succeeded by another Portuguese water dog, Benny.

When Oliver started, a dog in a funeral home was a rare sight. Statistics aren't kept, but Jessica Koth, spokeswoman for the National Funeral Directors Association, said, "We hear from members that more and more of them are bringing animals into funeral homes, be it a dog or a cat, whether it's a certified therapy dog or just an extremely well-behaved family pet."

Some of the funeral directors are dubious about cats, however.

"Dogs are the only creature that love you more than they love themselves," Krause said. "Cats tend to lurk. They could surprise people."

Gayle Armes, owner of the Armes-Hunt funeral homes in Fairmount and Marion, Indiana, says his dog Judd, a golden retriever, serves a vital function by giving mourners "something else to focus on."

"The ones who need it, they tend to go over to him, maybe kneel and love on him and he loves on them," Armes said.

At Merkel Funeral Service, based in Monroe, Michigan, outreach coordinator Renee Mullendore said the owner's cockapoo, Lola, "can pick out who needs attention" and sometimes tries to sit on their laps.

In White Plains, 1-year-old Lulu has been on duty since last month. She lives with Fiorillo and her devotion to him is evident as she follows his every step and command. Lulu even "prays" when prompted, bowing her head between her front paws while perched on a kneeler.

Fiorillo said he first thought about using a dog in the business when he saw how a tiny Maltese being carried through an airport helped distract and calm passengers as flights were being canceled and delayed.

"My purpose was to take a tense, uncomfortable situation and ease the tension a little bit," he said.

He bought Lulu as a newborn and had her trained for almost a year for a total cost of about $5,000. She wears a blue and white vest that says "Therapy Dog" on one side and "Pet me, I'm friendly" on the other.

When mourners come to the stately funeral home to make arrangements, Fiorillo asks if they'd like to meet Lulu and tells them she's available - no extra charge - for any wake or funeral. Almost all have accepted.

"It's not like she's running around during the wake," he said. "If Lulu's getting too much attention, then I might say she's tired and pull her back."

Lulu has her own business cards and "sends" thank-you notes to children she's befriended.