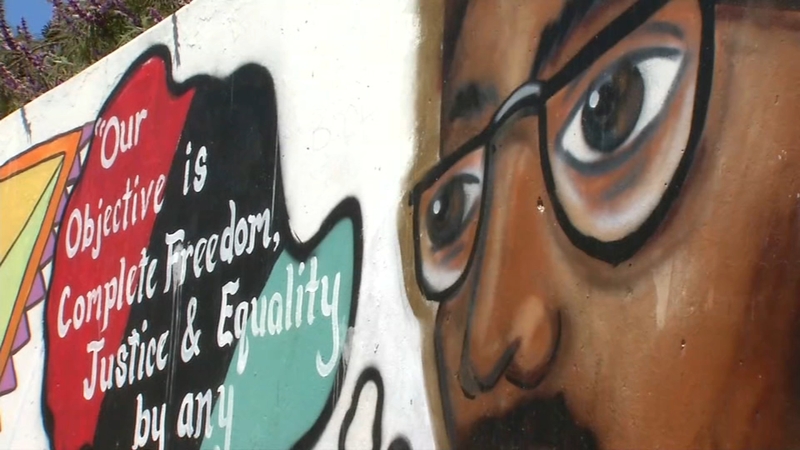 SAN FRANCISCO (KGO) -- The murder of George Floyd provoked a transformative response at many school districts across the country. At San Francisco Unified, now more than ever, the work involving teachers, students and staff is done through an anti-racism lens.

A massive rally protesting the death of George Floyd and calling for an end to police brutality was organized last June by a few students from Mission High in San Francisco. That lesson in activism didn't happen overnight. It's been a work in progress.

"We're trying to highlight for our students that young people are at the center of those movements and we want to lift that up so young people feel a sense of power to make things better in the present and future," explained Nikhil Laud from the school district's Ethnic Studies division.

Today, there is more urgency around the work of anti-racism education at San Francisco Unified. Creating and teaching racial awareness at every school is not new to this district. In fact, they've been at it for awhile, but what George Floyd's death did was to allow the school district to go further, faster.

San Francisco Unified School District's Art Department is taking a bold stand on acronyms, saying they tend to "alienate those who may not speak English to understand the acronym."

Here's an example: Those being trained in a leadership position are continuously receiving intensive coaching. But after what happened in Minneapolis, the district took that training to another level.

"We said every leader this year has to lead at least three conversations with their staff around race. We've never put out that expectation before," expressed Kristin Bijur, Executive Director of Leadership Development for SFUSD.

Those conversations start out by acknowledging that racism is part of the fabric of America.

"To truly be anti racist you need to be a listener," said Enikia Ford Morthel, Deputy Superintendent of Instruction. Which is why the lesson plans that teachers follow are being updated every four to six weeks based on input from other educators, families and experts.

"How do I move to be an anti-racist educator? How do I interact with the students differently? How do I shift my expectation? How do I ask different questions and how do I respond differently to students?" added Ford Morthel.

The conservation to disrupt and speak out when things are wrong starts in kindergarten. One avenue is through the program called "San Francisco Loves Learning," produced by the district.

New policies have been implemented to improve student outcomes. After years of studying the results of a pilot Ethnic Studies program, the district finally adopted it for all students in 9th grade starting in 2024.

"This course increases their sense of belonging, it promotes a positive academic and cultural identity which makes them feel like school is a place for them," said Laud.

Another program called "Mastering Cultural Identity, MCI, is found at seven schools and will now increase to 15. MCI provides culturally relevant curriculum focusing on the contributions of African Americans. It's one of the programs within the African American Achievement and Leadership Initiative called AAALI.

RELATED: 1st Black valedictorian in USC's history among Class of 2021

"The focus or intention is to ensure that we have equitable opportunities and structures and access in order to close the achievement and opportunity gap in comparison to some of our other students in the district, explained Dr. Silindra McRay, the Director of African American Achievement and Leadership Initiative. McRay is also in charge of the Black Star Rising STEM program taught over the summer for five weeks. This year the district piloted a program to include 8th graders.

"Every Saturday for ten weeks and it focuses on creating a pipeline into our Black Start Rising Academy," she added.

What has changed this year? Most students agree there is an honest push to create a safe space for all groups.

"I feel like now it's a lot more comfortable to call people out and actually have these discussions," said Leslie Vallejo Avila, who is on the district's student advisory council and a Lowell High School senior.

Others agree it's time to learn more and do more.

"I think another part we need to have is accountability, so telling students we represent all backgrounds and we also respect opinions and if you can't engage in this conversation or engage nicely and respect this, you should not be in this conversation and they should work with them as well," added Shavonne Hines-Foster, the school board student delegate and also a Lowell High School student.