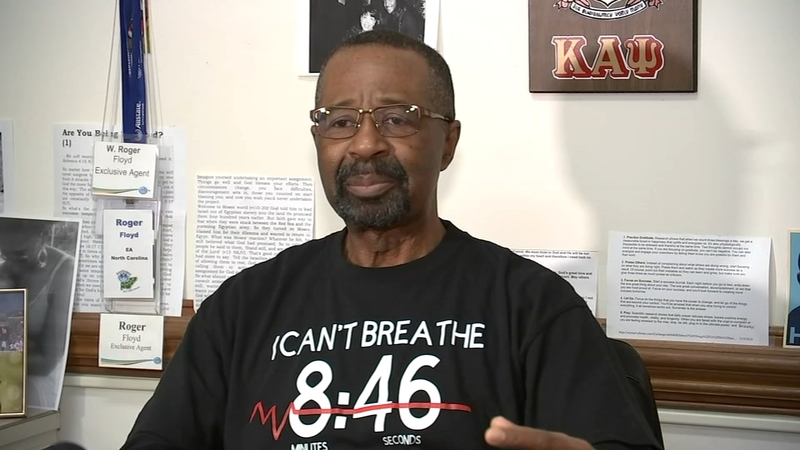 RALEIGH, N.C. -- The family of George Floyd is hoping to open a brick and mortar memorial center in his honor in Raleigh, North Carolina.

Floyd died on May 25, 2020 after a Minneapolis police officer kneeled on his neck for nearly nine minutes. His death sparked protests across the country.

"We were in a state of just confusion having lost a nephew at that point, heartbroken and just dealing with it one day at a time. But of course as time has passed on, we have come to accept God's will and that he truly has become a sacrifice or is a sacrifice and we know that his dying will not be in vain," Roger Floyd said.

Roger Floyd, uncle of #GeorgeFloyd, tells me his family is planning to open a brick and mortar memorial center in #Raleigh. It’s still in the planning stages. I talked to Roger on the 6-mo anniversary of George’s death. #Exclusive interview at 4p #abc11. https://t.co/frmcPR7I0U pic.twitter.com/ghLT3qCDZF

Roger, George's uncle, lives in Raleigh. That's where he -- and the George Floyd Memorial Foundation -- are spearheading a movement to create a memorial for his nephew.

"The focus is going to be basically on education, scholarships, funding -- those types of things -- electronic learning emphasis, wellness, bringing about urbanistic art," Roger said. "We want to establish a location within the center where we can have permanent art as well as temporary art that's constantly moving to tell the story about what we want to portray in the center."

The center is expected to cost millions of dollars. Roger said they are accepting donations and pursuing grants to make it happen.

He hopes to have the center finished in the next 24-36 months.

You can learn more about the plans for the center here.