"It kind of hits close to home, I know people in Ukraine"
KGO
By Cornell Barnard 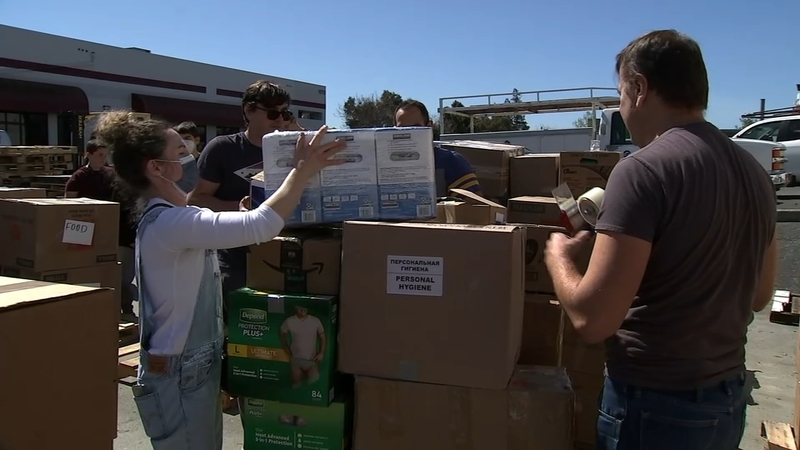 SAN JOSE, Calif. (KGO) -- In the South Bay, members of the Georgian American community are stepping up to help the people of Ukraine in a big way. On Sunday, they collected humanitarian relief supplies. Georgians know all too well the terror of a Russian invasion.

Volunteers spent their Sunday outside a San Jose warehouse, sorting and boxing a humanitarian aid for a country in need.

"It kind of hits close to home, I know people in Ukraine," said Gloria Kompel from Santa Clara.

Many here are members of the Bay Area's Georgian American community, a country that also knows the horrors of a Russian invasion.

A Bay Area volunteer with the American Red Cross traveled to Ukraine on his own to help those in need on the front lines.

"These people have their own experience the horrors of Russian aggression, in 2008 Russia attacked Georgia and occupied part of Georgian territory," said Igor Markov from Nova Ukraine.

"Georgia and its people stand with Ukraine and support their sovereignty," said Levan Beridze.

Ekaterina Pavlovic drew messages of hope for whoever opens her box of relief supplies. She's from Santa Clara but grew up in Moscow.

The heat on the train was as thick as the anxiety. Ukrainian survivors of one of the most brutal sieges in modern history were in the final minutes of their ride to relative safety

"There are actually Russians who are against this massacre, we want to help and unite the nations," said Pavlovic.

Dozens of labeled relief supplies are boxed and ready to go, from syringes and first aid kits to baby food.

The supplies will be flown to Poland and trucked into Ukraine. Right now, there's no time line when that will happen. Daniel hopes it's soon.

"I have family living in Ukraine in a bomb shelter, they worry day to day about safety and don't know where their other family members are," said Daniel Voskoboynik from Campbell.

Volunteers from different backgrounds, standing as one for Ukraine.