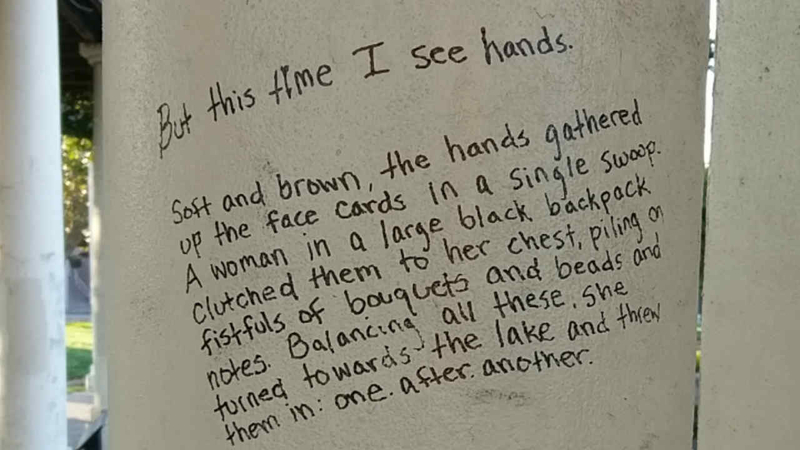 OAKLAND, Calif. (KGO) -- A memorial for the victims of the Ghost Ship Fire in Oakland recently disappeared and was replaced by a poem by an anonymous writer on the columns surrounding Lake Merritt. The author preaches love not hate and their words touched a lot of people in the area. But on Wednesday afternoon, a city worker painted over the poem, calling it graffiti.

Inflammatory words, borne from a fire that killed 36 people. They begin: "For months, I have felt uneasy. Each time I approach the pergola, its columns adorned with flowers and pictures, slogans, stories. Each time it looks different. Things left. Things removed. Each time I brace myself for an unpredictable feeling: loss, pain, indifference, delight."

It's a long, long poem that someone scrawled in ink -- filling walls and columns in the Pergola along Oakland's Lake Merritt.

There had been a memorial to victims of last December's Ghost Shop warehouse fire, here. Last week, the words appeared. They speak to the flames, to the spirit of art, and Oakland.

"I was wondering if it was crafted stream of consciousness or crafted beforehand," asked Oakland Resident Tristan Silverman. She joined many who stopped to look as they walked by.

Moments later, another person arrived with a bucket and paint brush. "It's graffiti," said the employee of Oakland's Department of Facilities Services.
Others disagreed. "I don't consider this graffiti," responded Oakland resident Sheri Wilson.

And yet, in less than one minute we photographed the city employee wiping words and stanzas from several columns. When we persisted, he took his brush and bucket and retreated to his truck.

"Libby Schaaf! I work for Libby Schaaf," he said showing us his printed orders.

To be fair, Mayor Schaaf's office said it played no role in his assignment. Oakland Public Works issued the orders in response to a public complaint.

Inside the Pergola, the symbolism of Oakland's whitewashing those words while the Ghose Ship Fire controversy still rages, seemed unavoidable.
"My gut feeling is that they don't care. This speaks to a lot of issues in Oakland," said Sheri Wilson.

"I can't decide if this is a covering up or a letting go," said Tristan Silverman.