Pappi's Pizza in Glenview combines pizza and salad into Pizzalad 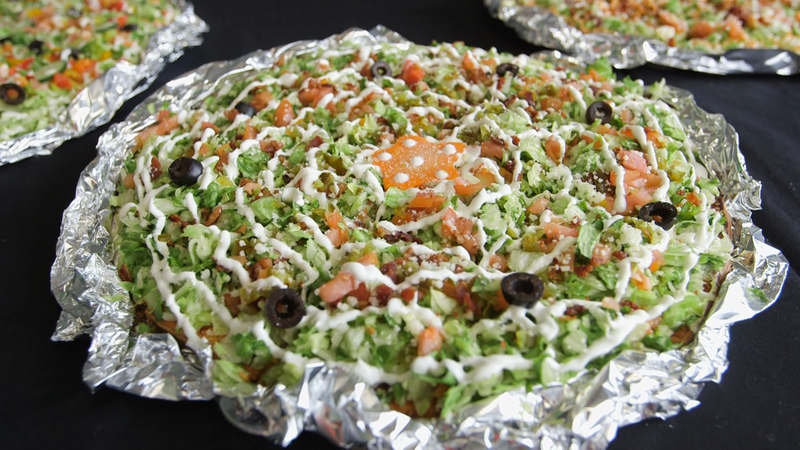 GLENVIEW, Ill. -- Cold pizza never tasted so good! What happens when a pizza meets a salad head on? It becomes Pappi's famous Pizzalad, and it sells out daily.

"It was a foreign concept for a lot of our customers because they weren't used to eating pizza cold. Something that no one has ever tried before and nobody that we know has offered a pizza salad like this," explained Jeffery Ramirez of Pappi's.

"The way we've constructed the vegetables, the way we put them on to the pizza, everything is generally symmetrical," he said. "Everything is placed specifically for the pizza to stand out. It's usually the talk of the night, the moment they just look at the pizza, without even trying it, without even tasting it, your eyes just gravitate towards it and it just becomes a focal point. When somebody see it and tastes it , generally, they're hooked."

Pappi's Pizza in Glenview was opened in 1990 by owners Miguel and Lucy Ramirez.

"My father is actually an immigrant from Colombia," said Ramirez. "He worked in a couple of different Italian restaurants, went back to Colombia, married my mom, moved back here to the States, after about a few months, after I was born, they opened up Pappi's Pizza. They've been in this location for the past 30 years."

It is definitely a family affair. All members of the Ramirez family have worked at Pappi's at some point, from answering phones to delivering orders.

Pappi's offers traditional thin, pan and stuffed pizza, but it's the Pizzalad that put them on the map. Around 2005, customers started seeking healthier pizza options.

"They still wanted pizza, they just wanted a healthier version of it . My dad is extremely passionate about what he does. He lives and breathes in this business. He started to play with the ingredients and started to develop an alternative to a pizza, using the ingredients we had here in the store," Ramirez said.

The ingredients are sourced locally and hand cut daily.

"It took us a couple of years to come up with the right combination of ingredients to make the pizza salad what it is today," Ramirez said. "After it started to take off, we then made it a part of our normal menu item. So that's when we started to come up with the Southwestern Pizza Salad, the BLT, the Buffalo Chicken, and the Chicken Caesar. The base layer starts with our cracker style crispy crust, we put the vegetables on top, it's fresh, it's nice and cold."

Customers come from near and far, ranging from the city, north suburbs and even across the border in Wisconsin.

"Anybody that's passing through this area will pick up a pizza salad and take it home," said Ramirez.