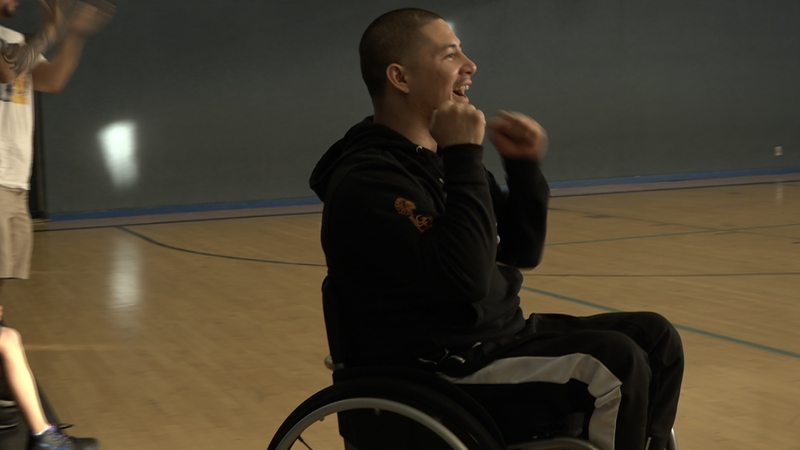 As a kid he would play basketball at the Boys and Girls Club in San Leandro and now he is coaching at the same center.

He also starred in football and went on to play at Hayward's Chabot College.

But it was a night in college that changed his life forever.

In 2007, he went out for a night of fun with his friends at a San Francisco night club.

At the end of the night he noticed a random stranger following him to his car. Moments later, there was a gunshot. That would be the last thing that he would remember about that night.

"It (the bullet) went through both of my lungs and shattered my spine. It still lies in my spine til this day," said Renowitsky.

The shooter was a young man who took Renowitsky's wallet, which only had $20 dollars in it, but the real cost was staggering.

"I woke up from a coma a month later to learn that I would never walk and never talk again."

Lying in the hospital on Christmas Eve, digesting that awful prognosis, the East Bay native made a decision: he would not let his injury stop him from making the best out of his life and making a difference in his community.

"Once I got my voice back I promised myself that I would not take my voice for granted and I will use it for something powerful," said Renowitzky.

After getting out of the hospital, he started a non-profit organization called 'Life Goes on' to educate inner city youth about senseless gun violence.

"I feel like the next generation coming up needs the most love and that they need the most attention. They can be the change to stop things like this from happening," said Renowitzky.

He has shared his message at more than a hundred California schools as well as hospitals, and juvenile halls around the world.

He's crossed paths with many famous celebrities along the way including Warriors point guard Stephen Curry.

Curry, touched by Renowitsky's message, brought him into the extended Warriors family where he met and touched the life of another star player. Kevin Durant.

They met in 2016 right after Durant joined Golden State from the Oklahoma City Thunder.

Durant received a lot of hate from fans after joining the Warriors and was feeling stuck.

In an interview with ESPN reporter Marc Spears Durant recalled a bracelet that Renowitsky gave him with "Life Goes On" printed on it inspired him.

"I was trying to move on with my life. To see the 'Life Goes On,' on my wrist, I didn't even realize it until a few days that it was pretty powerful," explained Durant. "I thought it was inspiring... You never know when you're going to be in contact with angels. I feel like he is one of those guys at just the right time, the perfect time, he was put in my life. Hopefully, he feels the same way."

Durant went on to wear bracelet for the entire season including the Warriors championship victory over the Cleveland Cavaliers.

But Renowitzky has also touched the lives of people dealing with spinal cord injuries.

Chris Rodriguez was ten-years-old when he was shot by a stray bullet on his way to piano practice in Oakland. He has been in a wheelchair ever since.

"Being part of L-G-O has opened up my eyes to a lot of stuff I can do for myself. He has inspired me and he has pushed me to do a lot of things," said Rodriguez.

When Renowitzky isn't coaching basketball he is playing on the court. A year after his injury he started playing wheelchair basketball.

He is currently playing with the Golden State 'Road Warriors', the official wheelchair basketball team of the Warriors.

"Once I started playing I got addicted. I was like you got to be kidding me this isn't real."

There is one dream Renowitzky is still chasing: walking again.

"I am just grateful for everyday I get to wake up. Despite this I am still working everyday to hopefully get back on my feet," said Renowitzky.